Kids Encyclopedia Facts
Not to be confused with Lancashire.

Lanarkshire is the most populous county in Scotland, as it contains most of Glasgow and the surrounding conurbation. In earlier times it had considerably greater boundaries, including neighbouring Renfrewshire until 1402. Lanarkshire is bounded to the north by the counties of Stirlingshire and Dunbartonshire (this boundary is split into two sections owing to Dunbartonshire's Cumbernauld exclave), to the northeast by West Lothian and Mid Lothian, to the east by Peeblesshire, to the south by Dumfriesshire, and to the west by Ayrshire and Renfrewshire.

From the mid-eighteenth century to the early twentieth century Lanarkshire profited from its rich seams of coal in places such as Glenboig. Unfortunately, as the coal industry developed around Glasgow in the 1700s the price of coal to the city rose under the control of a cartel of coal owners. The solution was to carve out a canal to take advantage of the good (and uncontrolled) coal deposits of the Monklands area. By 1793, the Monklands canal was completed and the Lanarkshire coal industry thrived. The resulting boom lasted for over 100 years but reached its peak by the second decade of the twentieth century and even two world wars failed to halt the contraction. Output in the county continued to fall and the National Coal Board concentrated investment in Ayrshire, Fife and the Lothians. By 1970 there were only four collieries left in Lanarkshire and the closure of Cardowan in 1983 brought the long decline to an end.

Lanarkshire hosted the International Children's Games in August 2011. A total of 1,300 competitors and coaches, along with administrators and delegates, representing 77 cities from 33 countries worldwide attended. 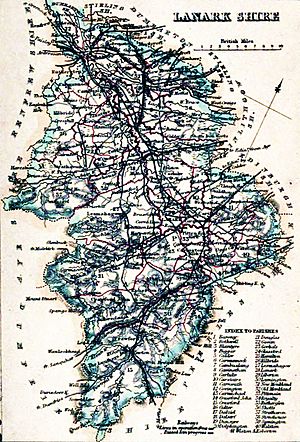 Digitised historic and modern maps of Lanarkshire are available from National Library of Scotland including: 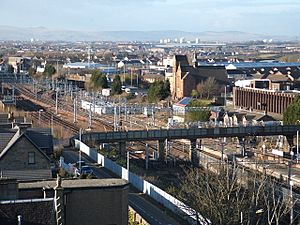 The M74 motorway links Glasgow with Carlisle and points further south, with the M8 linking the city to Edinburgh. Glasgow and the surrounding areas are well served by numerous roads and train lines. The West Coast Main Line cuts north-south across the county and connects Glasgow with Manchester, Birmingham and London. Glasgow is also served by the Glasgow Subway.

All content from Kiddle encyclopedia articles (including the article images and facts) can be freely used under Attribution-ShareAlike license, unless stated otherwise. Cite this article:
Lanarkshire Facts for Kids. Kiddle Encyclopedia.