West Lothian (Scots: Wast Lowden, Scottish Gaelic: Lodainn an Iar) is one of the 32 council areas of Scotland, and one of its historic counties. The county, which was also known as Linlithgowshire, was bounded by the Avon to the west and the Almond to the east; the modern council area occupies a smaller area, with land in the west given to Falkirk and land in the east given to Edinburgh following local government reforms in the late 20th century. It did however gain part of the Pentlands from Midlothian.

West Lothian lies on the southern shore of the Firth of Forth and is predominantly rural, though there were extensive coal, iron, and shale oil mining operations in the 18th and 19th centuries, which created distinctive red spoil heaps (locally known as "bings") throughout the council area. The old county town was the royal burgh of Linlithgow, but the largest town (and the second largest town in Lothian after Edinburgh) is now Livingston.

The council area borders, in a clockwise direction, the council areas of Edinburgh, the Scottish Borders, North and South Lanarkshire, and Falkirk. The county bordered Midlothian (which then included Edinburgh), Lanarkshire, and Stirlingshire. Its eastern border with Midlothian was formed by the Briech Water, from its source until it reached the Almond, and it then followed the Almond to the Forth (except by Livingston, where Midlothian intruded about a mile past the Almond to include the hamlets of Howden, Craigshill, and Pumpherston). The southern border was mostly arbitrary, while the western border was formed first by the Drumtassie Burn and then by the Avon. It had an area of 120 sq. miles (310 km2), making it the third smallest of Scotland's 33 counties and smaller than the modern council area. Significant towns not included in the council area are the coastal burghs of Bo'ness and Queensferry and the town of Kirkliston.

Geologically, most of the area is underlaid by Carboniferous sedimentary rocks running in strips from north to south. The eastern and southern rocks are the oldest and least useful. Further west is a large field of shale oil, then sedimentary and basalt rocks supplying silica sand, and then coal.

The area rises from lowlands in the north to the Pentland Hills in the southeast, while the southwest is moorland. Two thirds of the land is agricultural, while a tenth is urban. Significant watercourses include the Almond and the Union Canal, while the main bodies of water are Linlithgow Loch and the various reservoirs in the Pentlands. 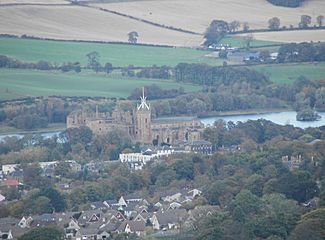 West Lothian was extensively settled in prehistoric times, and several ancient burial sites have been uncovered, such as at Cairnpapple Hill. There are remains of hillforts on Cockleroy, Peace Knowe, Bowden, Cairnpapple, and Binns Hills. The area was anciently inhabited by Britons of the tribe known as the Votadini or Gododdin. By 83 AD, southern Scotland had been conquered by Romans, who built a road from their fort at Cramond to the eastern end of the Antonine Wall, as well as forts in West Lothian (of which Castle Greg is a known example). The Romans withdrew roughly two centuries later, and the area was left to the Britons until the arrival of Anglo-Saxons in the fifth and sixth centuries, who brought Lothian under the rule of the Kingdom of Northumbria. In later centuries the region was regularly overrun by Gaelic-speaking Scots, and it became permanently part of the Kingdom of Scotland in the 11th century.

Scotland was split into sheriffdoms, what would later become counties, in the reign of David I. The first known reference to a sheriff of Linlithgow occurs in a charter dating from the reign of his successor Malcolm IV. For a time West Lothian became a constabulary, but it seems to have been made a sheriffdom again during the reign of James III. 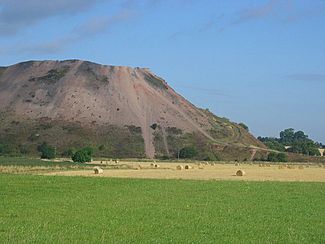 In pre-industrial times West Lothian was almost entirely agricultural. In the way of heavy industry there was a silver mine at Cairnpapple, a cotton mill at Blackburn, paper mills at Linlithgow, and shallow coal mines around Bathgate and Whitburn. The county was radically changed by the Industrial Revolution, with the opening of deep-pit iron, coal, and shale oil mines, as well as foundries and brickworks. Many of the houses built for the expanding population were shoddy, necessitating the building of thousands of council houses in the latter part of the 20th century, especially at Livingston, which had historically been a minor village. The bings produced by the mining industry, 19 of which still stand in West Lothian, were at first considered blights, but now are thought of as monuments to Scotland's industrial past, and a representation of one appears on the council's coat of arms. Heavy industry declined after the Second World War, and the last shale oil mine closed in 1962.

See also the pages of the West Lothian Archaeological Trust

The West Lothian question, referring to whether Scottish, Welsh, and Northern Irish MPs should be allowed to vote on English laws, is so named because it was supposedly first raised by Tam Dalyell while he was MP for West Lothian.

Famous people from West Lothian include:

All content from Kiddle encyclopedia articles (including the article images and facts) can be freely used under Attribution-ShareAlike license, unless stated otherwise. Cite this article:
West Lothian Facts for Kids. Kiddle Encyclopedia.