The Bo’ness and Kinneil Railway is a heritage railway in Bo'ness, Scotland. It is operated by the Scottish Railway Preservation Society (SRPS), and operates a total of over 5 miles (8 km) of track (between Bo'ness and Manuel Junction, via Kinneil and Birkhill), virtually the entire Slamannan and Borrowstounness Railway that became part of the former North British Railway on the Firth of Forth. Bo'ness railway station is the nucleus of the Museum of Scottish Railways.

The railway has three main stations and small halt: 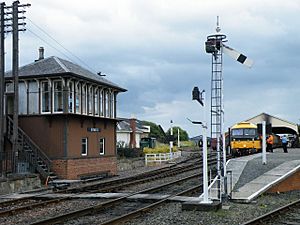 A view of the railway at Bo'ness

Most of the steam fleet have had major industrial careers in Scotland, but a few ex-mainline types are also in constant service.

As with almost all of the preserved lines in Britain, diesel shunters are predominantly used to move rolling stock and locomotives around the yard at Bo'ness.

Former main-line diesel locomotives are abundant on the Bo'ness Railway, and diesel galas are held each year.

The DMUs do not see much service.

The SRPS's stock at Bo'ness includes 67 passenger and light freight coaches. It is one of the most varied collections in the U.K.

A small collection of LNER coaches reside at Bo'ness, though most of the collection has yet to be restored.

Two of the railway's Norwegian coaches were originally restored and used on passenger trains, though they have since been grounded for other purposes.

The SRPS owns some of the last surviving HR coaches in existence today.

Caledonian Railways stock was originally used with the CR 0-4-4T, but has seen little use of late due to the loco being out of traffic.

As with the LMS and Caledonian coaches, none of the North British Railway coaches are in service on passenger trains.

The BR Mk1s were an abundant type of coach on the mainline in the early days of BR steam, and like the BR Standards, were built to be both durable and easy to maintain. Today Mk1s make up over 95% of all Bo'ness trains, generally made of three or four of them in Carmine/Cream, SRPS LMS Maroon.

The Bo'ness and Kinneil Railway's stock includes rare, or even unique, builds for special purposes.

Due to a lack of loops mid-journey, demonstration freight trains are restricted to the yard at Bo'ness.

In the days of steam wagons like these would have been used to transport coal across the country and into England and Wales.

Brake vans are traditionally used either in front of, or behind trains.

These wagons were used to transport larger quantities of goods than open wagons,

Tankers were originally designed for the safe transportation of liquids.

Appearances in film, TV and media

All content from Kiddle encyclopedia articles (including the article images and facts) can be freely used under Attribution-ShareAlike license, unless stated otherwise. Cite this article:
Bo'ness and Kinneil Railway Facts for Kids. Kiddle Encyclopedia.