Borrowstounness commonly known as Bo'ness ( boh-NESS) is a coastal parish in the Central Lowlands of Scotland. It sits on a hillside on the south bank of the Firth of Forth within the Falkirk council area, 16.9 miles (27.2 km) north-west of Edinburgh and 6.7 miles (10.8 km) east of Falkirk. At the 2001 census, Bo'ness had a population of 13,961 but according to a 2008 estimate this has since risen to 14,490. Until the local government reforms of the late 20th century, it lay within the county of West Lothian.

The name Borrowstoun refers to a hamlet a short way inland from Borrowstounness. The suffix 'ness' (Norse for 'headland') serves to differentiate the larger town from the hamlet. The name itself is derived from the Old English Beornweardstun meaning 'Beornweard's town'. 'Beornweard' is itself an Old English name (from Beorn, 'warrior/man' or 'bear', and weard, 'warden, guardian, keeper'.)

This was later corrupted to Borrowstoun, Scots for 'town with a charter'.

The town's full name is rarely used, and is nowadays almost always contracted to Bo'ness. 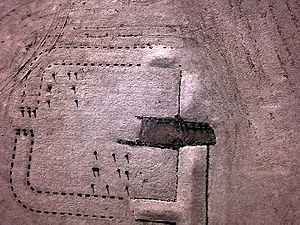 Bo'ness has important historical links to the Roman period and marks the eastern extent of the Antonine Wall which stretched from Bo'ness to Old Kilpatrick on the west coast of Scotland. The Antonine Wall was named as an extension to the Frontiers of the Roman Empire World Heritage Site by UNESCO in July 2007. A Roman fortlet can still be seen at Kinneil Estate.

Roman artifacts, some with inscriptions, have been found in the eastern part of the town at Carriden. A Roman fort called Veluniate, long since lost to history, once stood on the site now occupied by the grounds of Carriden House. Indeed, it is said that stones from the fort were used in the building of the mansion house.

Several artifacts have been uncovered over the years by the local farming community, including The Bridgeness Slab with many of them now on display in the Museum of Edinburgh. Other Roman sites have been identified at Muirhouses (known locally as 'The Murrays') and Kinglass on the south-east side of the town.

Kinneil House is a historic house to the west of Bo'ness now in the care of Historic Scotland. It sits within a public park, which also incorporates a section of the Roman Antonine Wall. In the grounds of Kinneil House is the ruin of the small house where James Watt worked on his steam engine.

Kinneil was mentioned by Bede, who wrote that it was named Pennfahel ('Wall's end') in Pictish and Penneltun in Old English. It was also Pengwawl in old Welsh. 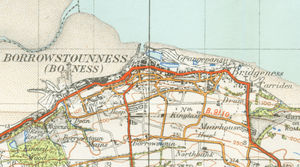 A map of Borrowstounness from 1945 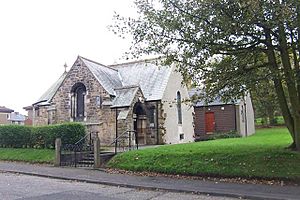 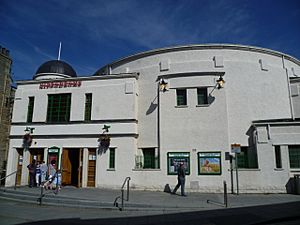 Bo'ness is now primarily a commuter town, with many of its residents travelling to work in Edinburgh, Glasgow or Falkirk. One of the main local sources of employment is the Ineos petrochemical facility (formerly BP) located in nearby Grangemouth.

Present-day attractions in the town include the Bo'ness & Kinneil Railway and the Birkhill Fireclay Mine. Kinneil House, built by the powerful Hamilton family in the 15th century, lies on the western edge of the town. In the grounds are a cottage where James Watt worked on his experimental steam engine and the steam cylinder of a Newcomen engine. The remains of an engine house are located in Kinningars Park, off Harbour Road.

Bo'ness has a single secondary school, Bo'ness Academy, and five primary schools: Kinneil, Deanburn, Bo'ness Public School, St Mary's, and the Grange School. There are a number of churches, including Bo'ness Old Kirk, Carriden Parish Church, St Andrew's Parish Church, Craigmailen United Free Church, St. Catharine's Episcopal Church, Bo'ness Apostolic Church, Bo'ness Baptist Church, The Bo'ness Salvation Army and St. Mary of the Assumption Roman Catholic Church. On 25 October 2011 it was announced that the Rev Albert Bogle, minister at the town's St Andrew's Church, would be nominated to be Moderator of the General Assembly of the Church of Scotland for 2012.

As of 2011, consideration is being given to the possible renovation of the town's harbour.

Bo'ness is also home to the recently refurbished Hippodrome Cinema, which is the oldest picture house in Scotland. The building, along with many other buildings in Bo'ness, was designed by Matthew Steele, a local resident and architect. The Hippodrome was built in 1912.

All content from Kiddle encyclopedia articles (including the article images and facts) can be freely used under Attribution-ShareAlike license, unless stated otherwise. Cite this article:
Bo'ness Facts for Kids. Kiddle Encyclopedia.