Falkirk ( or Scots: The Fawkirk; Scottish Gaelic: An Eaglais Bhreac) is a large town in the Central Lowlands of Scotland, historically within the county of Stirlingshire. It lies in the Forth Valley, 23.3 miles (37.5 km) north-west of Edinburgh and 20.5 miles (33.0 km) north-east of Glasgow.

Falkirk had a resident population of 32,422 at the 2001 census. The population of the town had risen to 34,570 according to a 2008 estimate, making it the 20th most populous settlement in Scotland. Falkirk is the main town and administrative centre of the Falkirk council area, which has an overall population of 156,800 and inholds the nearby towns of Grangemouth, Bo'ness, Denny, Larbert and Stenhousemuir.

The town is at the junction of the Forth and Clyde and Union Canals, a location which proved key to its growth as a centre of heavy industry during the Industrial Revolution. In the 18th and 19th centuries Falkirk was at the centre of the iron and steel industry, underpinned by the Carron Company in nearby Carron. The company was responsible for making carronades for the Royal Navy and later manufactured pillar boxes. In the last 50 years heavy industry has waned, and the economy relies increasingly on retail and tourism. Despite this, Falkirk remains the home of many international companies like Alexander Dennis, the largest bus production company in the United Kingdom.

Falkirk has a long association with the publishing industry. The company now known as Johnston Press was established in the town in 1846. The company, now based in Edinburgh, produces the Falkirk Herald, the largest selling weekly newspaper in Scotland.

Attractions in and around Falkirk include the Falkirk Wheel, The Helix (home to The Kelpies), Callendar House and Park and remnants of the Antonine Wall. In a 2011 poll conducted by STV, it was voted as Scotland's most beautiful town, ahead of Perth and Stirling in 2nd and 3rd place respectively.

An Eaglais Bhreac is a derivative formed from the Scottish Gaelic cognate of the first recorded name Ecclesbrith from the Brittonic for "speckled church", presumably referring to a church building built of many-coloured stones. The Scottish Gaelic name was translated into Scots as Fawkirk (literally "variegated church"), then later amended to the modern English name of Falkirk. The Latin name Varia Capella also has the same meaning. Falkirk Old Parish Church stands on the site of the medieval church, which may have been founded as early as the 7th century.

The Antonine Wall, which stretches across the centre of Scotland, passed through the town and remnants of it can be seen at Callendar Park. Similar to Hadrian's Wall but built of turf rather than stone so less of it has survived, it marked the northern frontier of the Roman Empire between the Firth of Forth and Firth of Clyde during the AD 140s. Much of the best evidence of Roman occupation in Scotland has been found in Falkirk, including a large hoard of Roman coins and a cloth of tartan, thought to be the oldest ever recorded.

In the 18th century the area was the cradle of Scotlands's Industrial Revolution, becoming the earliest major centre of the iron-casting industry. James Watt cast some of the beams for his early steam engine designs at the Carron Iron Works in 1765. The area was at the forefront of canal construction when the Forth and Clyde Canal opened in 1790. The Union Canal (1822) provided a link to Edinburgh and early railway development followed in the 1830s and 1840s. The canals brought economic wealth to Falkirk and led to the town's growth. Through time, trunk roads and motorways followed the same canal corridors through the Falkirk area, linking the town with the rest of Scotland. Many companies set up work in Falkirk due to its expansion. A large brickworks was set up at this time, owned by the Howie family. During the 19th century, Falkirk became the first town in Great Britain to have a fully automated system of street lighting, designed and implemented by a local firm, Thomas Laurie & Co Ltd.

Falkirk is located in an area of undulating topography between the Slamannan Plateau and the upper reaches of the Firth of Forth. The area to the north of Falkirk is part of the floodplain of the River Carron. Two tributaries of the River Carron - the East Burn and the West Burn flow through the town and form part of its natural drainage system. Falkirk sits at between 50 metres (164 ft) and 125 metres (410 ft) above sea level.

The underlying geology of the town of Falkirk is characterised by glacial deposits. Elevations above 100 metres (328 ft) are covered by a mixture of glacial till and boulder clay with low-lying areas covered by sandy soils and loams. As Falkirk is not far from the coast, post-glacial features akin to raised beaches are particularly predominant to the north of the town centre, and this gives rise to differing elevations within the town.

Unsorted glacial till gives rise to such features of glacial deposition as eskers, and drumlins which are predominant over much of the area. Such elements provide natural transport routes and it is this complex underlying geology that the town is built upon.

Like much of the rest of Scotland, Falkirk has a temperate maritime climate, which is relatively mild despite its northerly latitude. Winters are especially mild given that Moscow and Labrador lie on the same latitude, with daytime temperatures rarely falling below freezing, or 0 °C (32 °F). Summer temperatures are comparatively cool, with daily upper maxima rarely exceeding 23 °C (73 °F). The proximity of the town to the sea mitigates any large variations in temperature or extremes of climate. The prevailing wind direction is from the south-west, which is associated with warm, unstable air from the Gulf Stream that gives rise to rainfall. Winds from an easterly direction are usually drier but colder. Rainfall is distributed fairly evenly throughout the year. Vigorous Atlantic depressions - sometimes called European windstorms can affect the town between October and March. The highest recorded temperature was 31.5C in August 2010.

The United Kingdom Census 2001 identified the town as having a total resident population of 32,422. The population was estimated at 34,570 in 2008 which makes the town the 20th most populous settlement in Scotland. The wider Falkirk area which includes Grangemouth, Larbert and Stenhousemuir has an overall population of 98,940 making this the 5th largest urban area after Glasgow, Edinburgh, Aberdeen and Dundee. The population of the town and surrounding area is forecast to grow over the next ten years, primarily due to net in migration from other parts of Scotland and the UK. Unemployment in the Falkirk area is low at 2.5%, below the Scottish average, but average household income and gross weekly pay are below the comparative Scottish and UK averages. 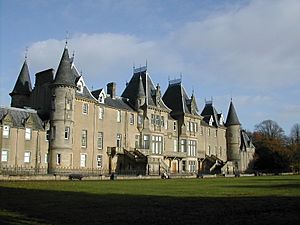 Falkirk hosted a national arts festival which ran in Callendar Park from 2000-2009 called Big In Falkirk. After its inception in 2000, the festival won Scottish Thistle Award for Events & Festivals in 2005. Consisting of a free weekend of events, the festival was one of the largest cultural events in Scotland, attracting over 100,000 people. Hosted in Falkirk’s historical Callendar Park, the venue covers 180-acre (0.73 km2) with Callendar House as the focal point, the entertainment featured a wide variety of outdoor theatre, pyrotechnic displays, arts, comedy and big name music acts, alongside activities for all ages.

Falkirk hosted the Royal National Mòd in 2008. The Gold medals were won by Falkirk resident Lyle Kennedy and Kerrie Finlay from Inverness. Interest in Gaelic has grown in Falkirk since the Mod and there are now five Gaelic organisations active in the Falkirk area: An Clas Gàidhlig (provides Gaelic lessons to adults), An Comunn Gàidhealach Meur na h-Eaglaise Brice (is the local branch of An Comunn Gàidhealach), Fèis Fhoirt (provides traditional music and Gaelic song tuition for children and adults), Falkirk Gaelic Forum (promotes Gaelic in Falkirk) and Falkirk Junior Gaelic Choir (is a long established and successful youth choir).

Falkirk is served by a weekly newspaper, the Falkirk Herald, which is published by Johnston Press. The company was established by the Johnston family from Falkirk, who have been involved in publishing since 1767. The family acquired the Herald, their first newspaper, in 1846. The publishing company was renamed F Johnston & Co Ltd in 1882, a title it would retain until it was floated on the London Stock Exchange as Johnston Press in 1988. The corporate headquarters of Johnston Press are now in Edinburgh, but the company retains two offices in Falkirk and Grangemouth.

The historical Callendar House is an imposing mansion with a 600-year history which is now a museum and also has a cafe and shop. The Park Gallery, a contemporary art gallery is also based in the house. 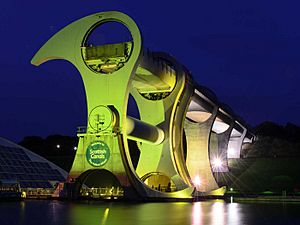 The Falkirk Wheel at Night

The Falkirk Wheel, the only rotary canal connector in the world, is located within Falkirk. The attraction was completed in 2002 and it connects the Forth and Clyde Canal to the Union Canal.

In Falkirk High Street lies the Falkirk Steeple, the current building was built in 1814 and is protected as a category A listed building. A stylised image of the steeple appears on the crest of Falkirk Football Club. It is widely regarded as the centre point of the town.

The Church of Scotland's Presbytery of Falkirk includes congregations in Bo'ness, Bonnybridge, Cumbernauld, Grangemouth and Larbert, as well as Falkirk.

Falkirk is twinned with:

All content from Kiddle encyclopedia articles (including the article images and facts) can be freely used under Attribution-ShareAlike license, unless stated otherwise. Cite this article:
Falkirk Facts for Kids. Kiddle Encyclopedia.