Kids Encyclopedia Facts
For the battle in 1298, see Battle of Falkirk.

In early January, the Jacobite army besieged Stirling Castle and on 13 January, government forces under Henry Hawley advanced north from Edinburgh to relieve it. He arrived at Falkirk on 15 January and the Jacobites attacked late in the afternoon of 17 January.

Fought in failing light and heavy snow, Hawley's left wing was routed but his right held firm; in the confusion, the Jacobites failed to follow up, allowing the government troops to withdraw and regroup in Edinburgh. When they resumed their advance on 30 January, the Jacobites abandoned the siege and withdrew to Inverness, before the rebellion ended at the Battle of Culloden in April.

The battlefield has been inventoried and protected by Historic Scotland under the Historic Environment (Amendment) Act 2011.

Although the invasion of England had few tangible benefits, reaching Derby and returning to Scotland was a considerable military achievement. This brought in new recruits, while in late November, John Drummond arrived from France with weapons, money and 150 Irish and Scots regulars. In early January, Jacobite morale and numbers were at their peak, with 8,000 to 9,000 effectives.

Success at Inverurie on 23 December gave the Jacobites temporary control of the North-East, which they now attempted to extend to the Central Lowlands. Their objective was Stirling Castle, one of the strongest fortifications in Scotland and a position of major strategic importance that controlled access between the Highlands and the Lowlands. 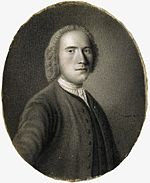 Split into two columns, the main army left Glasgow on 4 January for Stirling, where they would rendezvous with Drummond's troops. Lord George Murray and the first column marched on Falkirk, then turned north towards Stirling, leaving a cavalry detachment under Lord Elcho at Linlithgow to patrol the Edinburgh road. The second passed through Kilsyth, en route to Bannockburn, where Prince Charles established his headquarters at Bannockburn House, owned by the Jacobite Sir Hugh Paterson.

The town of Stirling quickly surrendered but the castle was a far greater challenge, with strong defences and a garrison of 600 to 700 troops, under William Blakeney, an experienced and determined Irish veteran. Siege operations began on 8 January but for a number of reasons, progress was slow. On 13 January, Henry Hawley, government commander in Scotland, ordered his deputy Major General John Huske and 4,000 men to advance on Stirling, while he followed with another 3,000. They reached Falkirk on 15 January and made camp just outside the town; Murray withdrew to Plean Muir, southeast of Bannockburn, where he was joined by Charles and O' Sullivan, with all the troops that could be spared from the siege. 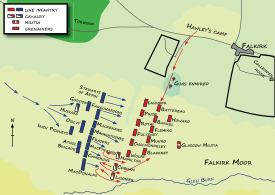 Deficiencies in leadership on both sides would have a significant impact on the battle. Hawley had commanded dragoons at Sheriffmuir in 1715 and overestimated the vulnerability of Highlanders to cavalry, while seriously underestimating their fighting qualities and numbers. The Jacobite senior command was divided between Charles and his exile advisors on the one hand and the Scots on the other, with several of Charles' aides openly stating Murray was a traitor.

When Hawley failed to attack on 16 January, Murray, Charles and O'Sullivan agreed to take the offensive on the morning of the 17th. Some of Drummond's regulars marched towards Stirling to distract the government scouts, while Murray's Highlanders took up position on the high ground to the south, above the camp. They were helped by Hawley's assumption they would not dare attack him and his location a mile away at Callendar House. According to an aide, they 'beat to Arms' at 12:00, then stood down and it was not until 14:30 Hawley realised the seriousness of the situation. The weather suddenly changed and it began raining and snowing heavily, with a strong wind blowing directly into the faces of Hawley's troops. 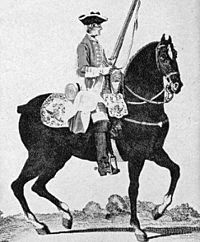 British Army dragoon, circa 1742; as on previous occasions, they proved poorly suited to fighting Jacobite forces.

The government army moved south on Maggie Wood's Loan past the Bantaskin House and up the slope of the Falkirk ridge. Despite their failure at Prestonpans, the dragoons led the way, an order their commander Francis Ligonier allegedly viewed as 'the most extraordinary ever given.' Their horses churned the track into a morass, slowing the infantry, while the guns in the rear became stuck and could not be freed in time to take part in the battle. The rain also affected the infantry's black powder cartridges; it was later estimated one out of every four muskets misfired.

The dragoons halted on the far side of the rise, with a bog to their left while the infantry deployed to their right (see Map). The front line consisted of the dragoons, then six battalions of veteran infantry; a second line with five more infantry battalions, then Howard's regiment and 1,000 men of the Argyll Militia behind. The inexperienced Glasgow militia were not considered front-line troops and deployed several hundred yards behind the dragoons on the left.

Opposing them was a first line composed of the Highland regiments, Lowland units behind, then a small number of cavalry and 150 regulars from the French Irish Brigade in the rear. Murray dismounted and marched with the MacDonalds on the extreme right, opposite the dragoons; crucially, he ensured they remained in line and ordered his front rank not to fire until he gave the word.

Murray later declared the position selected meant 'the Highland army had all the advantages nature or art could give them.' However, it was undermined by poor co-ordination and Drummond, who was appointed to command the Jacobite left, was absent when the battle began. He arrived soon after but this meant it lacked a senior commander at the start of action and while Murray urged Charles to name an alternative, he failed to do so.

Just after 16:00, Ligonier and his three regiments of dragoons attacked the MacDonalds, who waited until they came within pistol range, then fired a single volley. As at Prestonpans, they fled in disorder; restricted by the bog to their left, Cobham's regiment went north while the other two rode over the infantry forming to their rear. In a few minutes, the entire left-wing was swept away; all that remained for the Jacobites to achieve an overwhelming victory was to envelop Hawley's right.

However, the MacDonalds and entire front line charged down the hill and began sacking the government camp, while the sloping terrain and lack of visibility left Murray unable to ascertain who was where. Three battalions under Huske and Cholmondeley held their positions, shielded by the ravine to their front and repulsed attacks by the Jacobite left. These fled in their turn and according to O'Sullivan, many did not stop until they reached Stirling 'where they gave out we lost the day'. The darkness, continuing storm and general confusion on both sides ended the battle; Hawley initially withdrew to Falkirk, but most of his army was spread out on the road to Linlithgow, and they eventually returned to Edinburgh, where they re-formed.

The artillery commander, Captain Archibald Cunningham, abandoned his guns and used the transport horses to escape. When Huske's men retreated, they dragged some of the guns with them but most were left behind; Cunningham later killed himself. Ligonier, who left his sickbed in Edinburgh to take command, died shortly afterwards while the severity of the weather is demonstrated by the fact Cholmondeley suffered from severe exposure.

As in most battles of the period, many casualties occurred in the pursuit, a pattern repeated at Culloden in April but with the roles reversed. It is generally accepted the Jacobites lost 50 dead and 80 wounded, mostly on their left, while the government forces lost around 70 dead, plus another 200-300 wounded or missing. Twenty of the dead were officers, including Sir Robert Munro and his younger brother Duncan, who were killed in the pursuit and later buried in St Modan's, Falkirk. 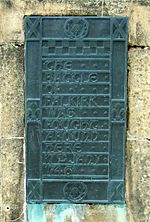 Plaque at the site of the battle

While a Jacobite success, Falkirk is often described as a 'hollow' victory, since poor command and co-ordination deprived them of the last opportunity to decisively defeat their opponents. One factor was confusion over the result; from their position on the left, Charles and O'Sullivan initially thought they had been defeated. Murray publicly blamed Drummond for arriving late and not supporting his success on the right, while Drummond blamed Murray for the failure of the three MacDonald regiments to press home their attack. Murray also accused O'Sullivan of cowardice, although Sheridan's official Jacobite account credited him with rallying "part of the left wing". Amid these recriminations, Charles returned to Bannockburn, where he fell ill, leaving Murray and the Highlanders at Falkirk.

On 29 January, Cumberland arrived in Edinburgh and assumed command. A number of soldiers were later executed for desertion; Hawley's poor leadership materially assisted the Jacobites but unlike Sir John Cope, he never faced a court-martial. The writer Horace Walpole (1717-1792) argued he was 'fifty times more culpable, since Cope miscarried by incapacity, Hawley by insolence and carelessness.'

The exiles failed to appreciate that while the military obligations of clan society allowed the chiefs to provide large numbers of men at short notice, the obligation assumed warfare was short-term and rarely took place in the winter. After a successful battle like Prestonpans, many went home to secure their loot and the clan chiefs could not prevent a similar flood of 'desertions' after Falkirk. When Cumberland resumed his advance on 30 January, Charles asked Murray to prepare a battle plan but was told the army was in no state to fight. This destroyed the last remnants of trust between the two parties; on 1 February 1746, the siege of Stirling was abandoned and the Jacobites withdrew to Inverness.

There are currently plans underway to erect a visitor centre in South Bantaskine Estate to commemorate the Battle of Falkirk Muir.[1]

All content from Kiddle encyclopedia articles (including the article images and facts) can be freely used under Attribution-ShareAlike license, unless stated otherwise. Cite this article:
Battle of Falkirk Muir Facts for Kids. Kiddle Encyclopedia.