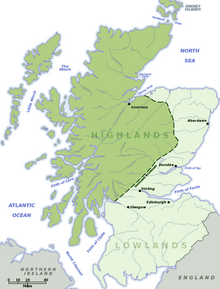 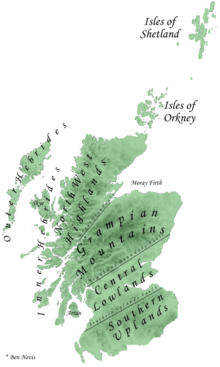 The Scottish Lowlands is the part of Scotland not referred to as the Highlands.

That is everywhere south and east of the Highland Boundary Fault, between Stonehaven and Helensburgh (on the Firth of Clyde).

Geographically, Scotland Lowlands are divided into two distinct areas: the Central Lowlands, and the Southern Uplands.

The southernmost counties of Scotland, nearest the border with England, are also known as the Borders.

The Central Lowlands or Midland Valley is a geologically defined area of relatively low-lying land in southern Scotland. It consists of a rift valley between the Highland Boundary Fault to the north and the Southern Uplands Fault to the south. The Central Lowlands are one of the three main geographical sub-divisions of Scotland, the other two being the Highlands and Islands which lie to the north and west and the Southern Uplands, which lie south of the second fault line.

The Midland Valley has fertile low-lying agricultural land and significant deposits of valuable coal and iron have led to the Central Lowlands being much more densely populated than the rest of Scotland.

The major cities of Glasgow, Edinburgh, Stirling and Dundee all lie in the Central Lowlands, and over half of Scotland's population lives in this region.

The Southern Uplands is the least populated of mainland Scotland's three major geographic areas. They lie south of the Southern Uplands Fault line that runs from Ballantrae on the Ayrshire coast northeastwards to Dunbar in East Lothian on the North Sea coast, a distance of some 220 km (140 mi). The term is used both to describe the geographical region and to collectively denote the various ranges of hills within this region.

The Southern Uplands Fault in Scotland is a fault that runs from Girvan (or more specifically from the Rhins of Galloway) to Dunbar on the East coast. It marks the southern boundary of the Scottish Midland Valley.

All content from Kiddle encyclopedia articles (including the article images and facts) can be freely used under Attribution-ShareAlike license, unless stated otherwise. Cite this article:
Scottish Lowlands Facts for Kids. Kiddle Encyclopedia.