Kincardineshire, also known as the Mearns (from the Scottish Gaelic A' Mhaoirne meaning "the Stewartry"), is a historic county, registration county and lieutenancy area on the coast of northeast Scotland. It is bounded by Aberdeenshire on the north and west, and by Angus on the south.

The name "Kincardine" is also used in Kincardine and Mearns, a committee area of the Aberdeenshire Council, although this covers a smaller area than the county.

The county's coat of arms displayed and reflected the history of the Honours of Scotland, which were kept at Dunnottar Castle and later at Kinneff, both within the historical boundaries of the county, during the Wars of the Three Kingdoms. It was: Gules, the Sceptre and Sword of Scotland crosswise in saltire, with the Crown of Scotland in chief and a ruined castle on a mound in base, all or. The motto was LAUS DEO, Latin for "Praise God". It was originally the motto of the Viscounts of Arbuthnott, whose seat is in the county, and the 14th Viscount was Lord Lieutenant of Kincardine at the time of the arms' matriculation by the Lord Lyon in 1927.

There was a Kincardineshire constituency of the House of Commons of the Parliament of Great Britain from 1708 to 1801 and of the Parliament of the United Kingdom from 1801 to 1918, representing the county of Kincardineshire, minus the parliamentary burgh of Inverbervie. Inverbervie was a component of the Aberdeen District of Burghs from 1708 to 1832 and of the Montrose District of Burghs from 1832 to 1950.

In 1983, eight years after the abolition of the local government county of Kincardineshire, North Angus and Mearns was replaced by new constituencies. 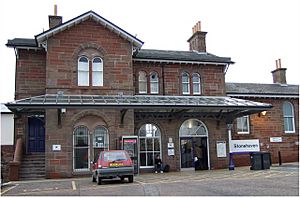 The Edinburgh-Aberdeen railway line runs parallel to the coast and through the towns of Laurencekirk, Stonehaven and Portlethen.

The ancient Causey Mounth road was built on high ground to make passable this only available medieval route from coastal points south to Aberdeen. This ancient passage specifically connected the Bridge of Dee to Muchalls Castle, Cowie Castle (and effectively Dunnottar Castle). The route was that taken by the Earl Marischal and Marquess of Montrose when they led a Covenanter army of 9,000 men in the first battle of the Bishops' Wars in 1639.

Elsick Mounth is a prehistoric trackway used by the Caledonian tribes as well as the Roman army in their northern invasion of the Scottish Highlands.

There are numerous natural features within Kincardineshire. Among the rivers are Cowie Water, Carron Water, Luther Water, Burn of Muchalls, Burn of Pheppie, Burn of Elsick, Burn of Monboys, Bervie Water and the lower reaches of the River Dee.

All content from Kiddle encyclopedia articles (including the article images and facts) can be freely used under Attribution-ShareAlike license, unless stated otherwise. Cite this article:
Kincardineshire Facts for Kids. Kiddle Encyclopedia.