Banchory ( Scots: Banchry, Scottish Gaelic: Beannchar) is a burgh or town in Aberdeenshire, Scotland. It is about 18 miles (29 km) west of Aberdeen, near where the Feugh River meets the River Dee.

The name is thought to be derived from an early Christian settlement founded by St Ternan. It is claimed that Ternan was a follower of St Ninian. Tradition has it that he established his settlement on the banks of the River Dee on what was later to become the kirkyard of the medieval parish of Banchory-Ternan. The village and parish retained the name until the 1970s. The original Gaelic form is almost identical to that of Bangor, of similar meaning, and also the site of a monastery, in Northern Ireland. Relics associated with St. Ternan were preserved by hereditary keepers at Banchory until the Scottish Reformation. Two early Christian cross-slabs survive in or near the old churchyard on the site of the early church. One is built into a corner of the 'mort house' in the churchyard, and shows two crosses incised in a worn pink granite slab. The other is a ringed cross in relief built into the wall facing the main road outside the churchyard.

Banchory is the largest town in the area and has a High Street. There are a number of hotels and restaurants including the Stag Hotel, Scott Skinners Bar and Restaurant, the Burnett Arms, and the Douglas Arms. The shops include newsagents, sports shops and chemists. Since the 1970s, the town has grown steadily. Since 2001 there has been rapid expansion. A large forested area 'the Hill of Banchory', owned by the Burnett family (owners of Crathes Castle), to the north east of the town has been replaced by a large housing estate and an influx of new residents. The Hill of Banchory primary school was opened in 2006 to cater for the increased population.

As a small rural town, surrounded by forestry and agricultural land, Banchory has seen considerable expansion in recent years. Development pressure continues to be strong and the town's population now exceeds 8,001. As Banchory expands, more demands are placed on local infrastructure such as doctors, dentists, sports facilities, swimming pool and schools. In recent years, the Bellfield Doctor's Surgery, the Fountain Dental Surgery, the Morrisons Supermarket and Banchory Academy have all undergone extended and upgraded facilities. In 2010, Tesco built an eco-store to the east of the town, it is hoped this will encourage further residential development to this end of the village.

Banchory Academy is a state (public) secondary school, with a school roll of over 950. Despite strong opposition from the local community, a retirement home 'Dalvenie Home' was built on land next to the Academy in the 1990s. The planning process was taken to the Scottish Office where local opposition was over-ruled. The retirement home opened in 2001 and has restricted expansion of the Academy and the adjacent sports centre.

The pressure for development and the value of land in Banchory means that the Primary and Secondary School Campus area is being considered for sale to housing developers, with sites for a new Academy and a new Primary being investigated.

Banchory is known as the Gateway to Royal Deeside. It is surrounded by lovely rural countryside and attractive hills. For the visitor, the town has much to offer with two famous castles nearby, Crathes and Drum – both run by the National Trust for Scotland. The Bridge of Feugh offers the chance to see salmon leaping and there are numerous fine golf courses nearby.

The small town museum recognises that this is the birthplace of James Scott Skinner and supports many local traditional musicians and singers and also has a fine selection of local archaeology. Local landmarks include Scolty hill; a hill topped by a tower monument, a memorial to General Burnett who fought alongside Wellington. 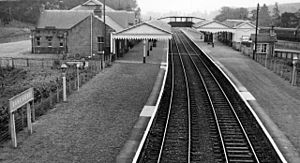 The immediate area is rich in Pictish archaeological sites with numerous stone circles being present in woodlands surrounding the town. Localised excavations of such sites have yielded numerous artefacts including jewellery made from polished local granite and early rudimentary forms of bottle openers.

Despite an inadequate and shallow 20metre swimming pool, which cannot be used for swimming competitions, Banchory Beavers swim team achieves national success. Aberdeenshire Council have agreed to include in their Capital Plan the building of a Sports Facility at Hill of Banchory. To ensure the project is providing the facilities that the community requires a substantial financial contribution is necessary to be raised from the Community which will guarantee a six lane swimming pool, a learner pool, a four court sports hall, be built.

Banchory River Festival is held every June and features a weekend of varied activities and attractions for all ages. The main event is held on the Saturday in the Bellfield Park, Banchory with dozens of stalls each with their own unique feature.

The Banchory show is held every July and attracts a good sized crowd to King George V Park. There is an Agricultural Show, Dog Show, Craft Fair, Highland Dancing Competition and the Scolty Hill Race, as well as traditional fairground stalls and games.

The Royal Deeside Railway originating at Milton of Crathes will shortly run to Banchory; this line is part of the original line to Ballater.

In 2017, the Banchory town service 205 was withdrawn. An internal bus was re-introduced in 2020. The town is on the Deeside Way, a shared pedestrian and cycle path which runs along the trackbed of the former Deeside Railway.

All content from Kiddle encyclopedia articles (including the article images and facts) can be freely used under Attribution-ShareAlike license, unless stated otherwise. Cite this article:
Banchory Facts for Kids. Kiddle Encyclopedia.