This article is about the plant. For the colour see Lavender (color).

Lavender is a type of plant found on almost all continents. It has a purplish colour. It has a colour named after it, called lavendar. Its Latin and scientific name is Lavandula. 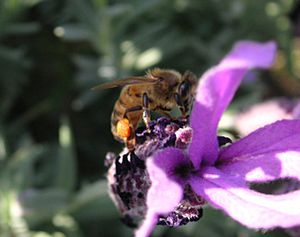 A bee on a lavender flower

Lavenders are very popular among gardeners. Sometimes their petals are dried and sealed in pouches for good scent, and sometimes put inside clothes to prevent moths, who can damage the clothes. 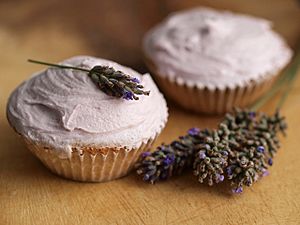 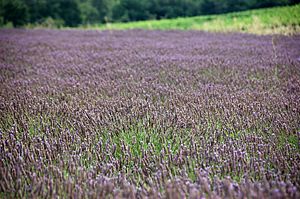 A field of lavender in France

Lavenders are sometimes put in medicine, too, and sometimes to prevent infection - such as lavender oil, that was used in World War 1 to disinfect walls and floors of the hospital. As the folk wisdom says, lavender oil is also helpful to headaches when rubbed on your temple, and lavender tea helps you relax before bed time. Lavender also is very helpful when applied to insect bites.

Sometimes, dried petals of lavender are used to throw confetti at a wedding.

All content from Kiddle encyclopedia articles (including the article images and facts) can be freely used under Attribution-ShareAlike license, unless stated otherwise. Cite this article:
Lavender Facts for Kids. Kiddle Encyclopedia.