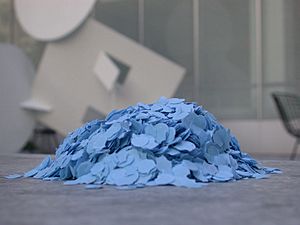 A pile of blue confetti.

Confetti are small pieces or streamers of paper, mylar, or metallic material which are usually thrown at parades, sporting team winners, and celebrations, especially weddings (and game shows, following the end of a milestone or the occasion of a big win. The origins are from the Latin confectum, with confetti the plural of Italian confetto, small sweet. Modern paper confetti trace back to symbolic rituals of tossing grains and sweets during special occasions, traditional for numerous cultures throughout history as an ancient custom dating back to pagan times, but adapted from sweets and grains to paper through the centuries. 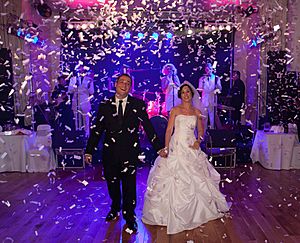 Confetti are made in a variety of colors, and commercially available confetti come in many different shapes. A distinction is made between confetti and glitter; glitter is smaller than confetti (pieces usually no larger than 1mm) and is universally shiny. Most table confetti are also shiny. While they are called metallic confetti they are actually metallized PVC. The most popular shape is the star.

Seasonally, Snowflake Confetti are the most requested shape. Most party supply stores carry paper and metallic confetti. Confetti are commonly used at social gatherings such as parties, weddings, and Bar Mitzvahs, but are by some people considered taboo at funerals. The simplest confetti are simply shredded paper (see ticker-tape parade), and can be made with scissors or a paper shredder. Other confetti often consist of chads punched out of scrap paper. A hole punch can be used to make small round chads. For more elaborate chads, a ticket punch can be used. Most pieces of paper flats will flutter as tumblewings giving flight times because of gliding aerodynamics. 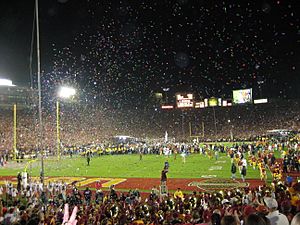 In recent years the use of confetti as a cosmetic addition to trophy presentations at sporting events has become increasingly common. In this case, larger strips of paper (typically measuring 20 mm × 60 mm) in the colors appropriate to the team or celebration are used. For smaller volumes of confetti, ABS or PVC "barrels" are filled and the confetti is projected via a "cannon" (a small pressure vessel) using compressed air or carbon dioxide. For larger venues or volumes of confetti, a venturi air mover powered by carbon dioxide is used to propel significantly larger volumes of confetti greater distances. 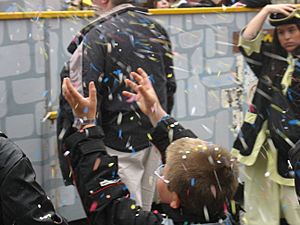 Since the Middle Ages, in Northern Italy it was common usage for the participants of carnival parades to throw objects at the crowd, mostly mud balls, eggs, coins or fruit. These traditions are still present in some towns in different forms, such as the "Battle of the Oranges" in Ivrea.

The use of throwing objects at parades is well documented in Milan since the 14th century. The nobles used to throw candies and flowers during the parades while dames threw eggshells filled with essences and perfumes. Lower-class people mocked the nobles by throwing rotten eggs, and battles among enemy factions or districts became common. In 1597 the city governor Juan Fernández de Velasco imposed a ban on the eggs throwing, along with banning squittaroli (spraying liquids in the street) and other immoral behaviors. The custom disappeared for about a century, coming back in the 1700s in the form of launch of small candies, mostly sugar-coated seeds. The seeds used for the sugar candies were mostly Coriander (coriandolo in Italian), a common plantation in the area: the Italian name for confetti is indeed coriandoli.

The candies were expensive, though, and the lower classes often used small chalk balls instead, called benis de gess (chalk candy). Those were officially defined as "the only material allowed to be thrown during the parades" in an edict by the Prefect of Milan in 1808, but the battles fought with them in the 1800s became too large and dangerous, with hundreds of people involved, leading to a ban of the chalk pellets. People circumvented the ban by using mud balls.

In 1875 an Italian businessman from Milan, Enrico Mangili, began selling paper confetti for use in the upcoming carnevale di Milano, the yearly parade held along the streets of the city.

At that time, the province of Milan was one of the main hubs of silk manufacturing. Mangili begun collecting the small punched paper disks that were left as a byproduct from the production of the holed sheets used by the silkworm breeders as cage bedding, and selling them for profit. The new paper confetti were well received by the customers, being less harmful, funnier and cheaper than the alternatives, and their use quickly replaced previous customs in Milan and northern Italy.

Scientific American recorded that the throwing of paper confetti (plain shredded paper) occurred at the 1885 New Year's Eve in Paris. Paper confetti became common in all of Europe in just a couple of decades later (unlike ticker tape parades, which never received as wide a diffusion as they did in the U.S.).

The singular form of the word confetti is a confettus. 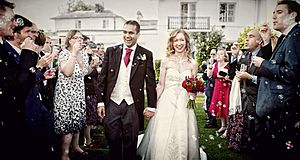 Bubbles used in place of confetti

A recent innovation at weddings is to use natural petal confetti. These are made from freeze-dried flower petals and are completely biodegradable. In fact many venues now state that only these biodegradable versions may be used. Some wedding venues have decided that due to the mess and potential inconvenience caused by the use of confetti to ban it usage completely. One way that this restriction has been circumvented is to use soap bubbles in place of confetti. 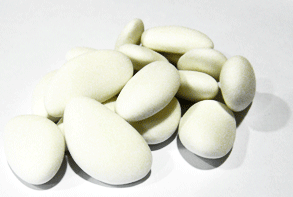 The English word confetti (to denote Jordan almonds) is related to the Italian confectionery of the same name, which was a small sweet traditionally thrown during carnivals. Also known as dragée, Italian confetti are almonds with a hard sugar coating; their name can be translated from Italian to mean confit, as in confiture. The Italian word for paper confetti is coriandoli which refers to the coriander seeds originally contained within the sweet.

By tradition, the Italian confetti (sugar coated almonds) are given out at weddings and baptisms (white coating), or graduations (red coating), often wrapped in a small tulle bag to give as a favor to the guests. For a wedding, they are said to represent the hope that the new couple will have a fertile marriage. The British adapted the missiles to weddings (displacing the traditional rice) at the end of the 19th century, using symbolic shreds of colored paper rather than real sweets.

All content from Kiddle encyclopedia articles (including the article images and facts) can be freely used under Attribution-ShareAlike license, unless stated otherwise. Cite this article:
Confetti Facts for Kids. Kiddle Encyclopedia.