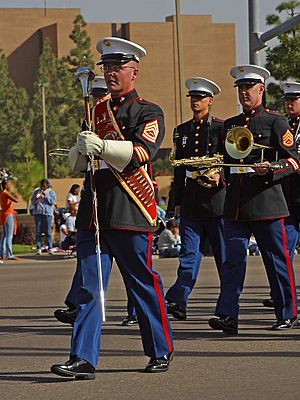 A parade is a large or small group of people who all walk together, usually down a street or road. People who walk in parades are often dressed in costumes, and followed by marching bands, floats or large balloons.

They are often held on holidays or to honor someone. Parades are held for many reasons, but are usually for celebrations of some kind. Days like St Patrick's Day are often celebrated with a parade.

One of the most famous parades is the Macy's Thanksgiving Day parade in New York City. Over 44 million people watch this parade on television each year.

All content from Kiddle encyclopedia articles (including the article images and facts) can be freely used under Attribution-ShareAlike license, unless stated otherwise. Cite this article:
Parade Facts for Kids. Kiddle Encyclopedia.