Eau Claire took its name from Eau Claire County. "Eau Claire" is the singular form of the original French name, "Eaux Claires", meaning "Clear Waters", for the Eau Claire River. According to local legend, the river was so named because early French explorers journeying down the rain-muddied Chippewa River, happened upon the Eau Claire River, excitedly exclaiming "Voici l'eau claire!" ("Here [is] clear water!"), the city motto, which appears on the city seal. The name is pronounced as if it were spelled "O'Clare".

The city was founded near the confluence of the Eau Claire and Chippewa rivers as three separate settlements. The main section of downtown is on the site of the original village, where Stephen McCann, in partnership with J. C. Thomas, put up three buildings in 1845. Although these structures were erected to establish a claim to the land they stood on, the McCann family moved into one of them and became the first permanent settlers. West Eau Claire, founded in 1856, was across the river near the present-day county courthouse, and incorporated in 1872. Between a mile and a half and two miles downstream, the Daniel Shaw & Co. lumber company founded Shawtown, which was annexed by the 1930s. By the 1950s, the entire city had spread far enough to the east to adjoin Altoona.

The terrain of the city is characterized by the river valleys, with steep slopes leading from the center to the eastern and southern sections of the city. The lands into which the urban area is currently expanding are increasingly hilly.

There are two lakes in the city, Dells Pond, and Half Moon Lake. Dells Pond is a reservoir created by a hydroelectric dam, and was formerly used as a holding pool for logs. Half Moon Lake is an oxbow lake created as part of the former course of the Chippewa River. 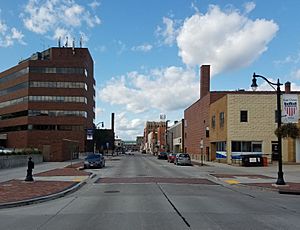 The Eau Claire Masonic Center is on the National Register of Historic Places.

As of 2017, Hmong Americans were the largest ethnic minority in Eau Claire. Jenna Christian, Pa Sia Low Moua, and Ingolf Vogeler, the authors of "The Cultural Landscape of the Hmong in Eau Claire, Wisconsin," wrote that the Hmong are also the city's "most visible ethnic group".

Eau Claire is located on freight rail lines owned by the Union Pacific Railroad, formerly owned by the Chicago, St. Paul, Minneapolis and Omaha Railway (Omaha Road), and later part of the Chicago and North Western Railway. C&NW operated passenger trains from Chicago through Eau Claire to the Twin Cities area until 1963 when the Twin Cities 400 ended service. Passenger rail service to Eau Claire is seen as critical by the Minnesota Department of Transportation and Wisconsin Department of Transportation, and they plan to return trains to the city by 2030.

The Episcopal Diocese of Eau Claire is headquartered in the city. Its mother church is Christ Church Cathedral. The city is also located within the Roman Catholic Diocese of La Crosse and is home to Sacred Heart Church and St. Patrick's Church. Additionally, Community House, First Congregational Church, First Methodist Episcopal Church and the Lutheran Church of the Good Shepherd are located in Eau Claire. 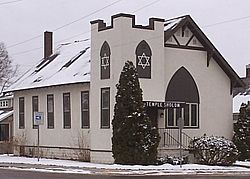 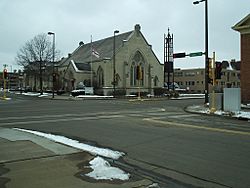 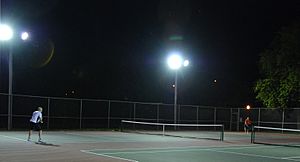 The lit tennis courts in Owen Park are popular with university students.

There are several large parks in the city: Owen Park, along the Chippewa River, home to a large bandshell where open-air concerts are held throughout the summer; Putnam Park, which follows the course of Putnam Creek and Little Niagara Creek east from the UWEC campus; Carson Park, situated in the middle of an oxbow lake; and Phoenix Park on the site of the old Phoenix Steel plant at the confluence of the Eau Claire and Chippewa River. Phoenix Park is the host of a weekly farmers market and open-air concerts during summer months. Riverview Park is also a common summer swimming destination, as well as one of the local boat landings. This park includes picnicking areas and grills, as well as public restrooms.

America's Promise named the city as one of the 100 Best Communities for Young People in 2007. Eau Claire was among the first Tree Cities in Wisconsin, having been recognized as such since 1980.

Eau Claire is sistered with the following towns:

Eau Claire styles itself as the "horseradish capital of the world", due to the presence of Silver Spring Foods, the world's largest grower and producer of horseradish. The climate, with its cool winters, is conducive to the horseradish crop. Other significant crops grown in the area are apples, pumpkins and plums. Menards, a Midwestern chain of home improvement stores owned by Wisconsin native John Menard, Jr., is headquartered in Eau Claire. 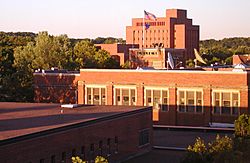 The University of Wisconsin–Eau Claire

There are 13 elementary schools, and 3 middle schools in the Eau Claire Area School District. In addition, there is the Chippewa Valley Montessori Charter School, which was founded in 2002, and follows the teaching of Maria Montessori.

Eau Claire Curling Club has been around for 64 years.

Established in 2009, The Chippewa Valley Roller Girls (CVRG) represent Eau Claire and the surrounding Chippewa Valley region. CVRG, a WFTDA League member, is Eau Claire's original all-female flat track roller derby league. It is a non-profit organization managed and operated by the skaters via an elected board of directors and skater-led committees.

Bateaux FC, an amateur soccer club, is based in the city. The club is a founding member of the Wisconsin Primary Amateur Soccer League (WPASL), a USASA and WSL-sanctioned league operating in western Wisconsin.

Eau Claire hosted the World Horseshoe Championship in 2003, and the Wisconsin State Horseshoe Tournament in 2019. 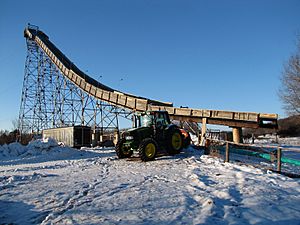 All content from Kiddle encyclopedia articles (including the article images and facts) can be freely used under Attribution-ShareAlike license, unless stated otherwise. Cite this article:
Eau Claire, Wisconsin Facts for Kids. Kiddle Encyclopedia.