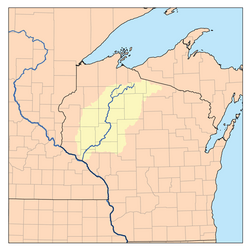 A map of the Chippewa River and its watershed 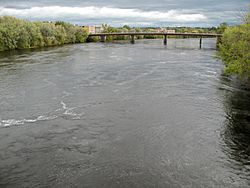 The Chippewa River as it passes through Pepin County, near Ella, WI.

The Chippewa River in Wisconsin flows approximately 183 miles (294 km) through west-central and northwestern Wisconsin. It was once navigable for approximately 50 miles (80 km) of its length, from the Mississippi River, by Durand, northeast to Eau Claire. Its catchment defines a portion of the northern boundary of the Driftless Area. The river is easily accessible for bikers and pleasure seekers via the Chippewa River State Trail which follows the river from Eau Claire to Durand.

The river flows from Sawyer County through Rusk, Chippewa, Eau Claire, Dunn, Pepin and Buffalo Counties, in Wisconsin, before emptying out into the Mississippi River. Sediment build-up at the river's mouth forms a delta that protrudes into the Mississippi, creating Lake Pepin in the process. Along the last 15 miles (24 km) of its course, the main channel forms the county boundary between Pepin and Buffalo Counties.

Major lakes along the river's route include the Radisson and Holcombe Flowages, Lake Wissota and Dell's Pond, all of which are reservoirs. The largest reservoir by far is the Chippewa Flowage, which is the 3rd largest lake in Wisconsin.

The river's confluence with the Red Cedar is just north of the Driftless Zone, at which point its floodplain widens out considerably, and includes numerous riverine islands.

The primary settlements along the river's course include Cornell, Chippewa Falls, Eau Claire, and Durand.

Historically, the Chippewa River was important as a floatway for lumbering and papermaking.

The river has a deep wide canyon, likely due to larger water discharges during Laurentide Ice Sheet retreat.

Chippewa River Bottoms is located along the river.

The 1742 Carte de la Louisiane et du Cours du Mississipi as "Rivière de bon Secours ou Hahatonouadeba", and then in the 1757 edition of the Mitchell Map as "Hahatonadeba River", the maps show the transliteration of the Dakota language name for the river Ḣaḣatuŋ[waŋ W]atpa. The word "Chippewa" is a rendering of "Ojibwe." The Ojibwe people controlled most of the upper Chippewa Valley and its tributaries until the Treaty of St. Peters in 1837.

Of the pine forests in Wisconsin in the 1800s, the Chippewa River system held more than even the Wisconsin River. It is estimated that the Chippewa system drained 34% of Wisconsin's pineries, as compared to 21% for the Wisconsin, 14% for the St. Croix, and 7% for the Black. Before logging, the Chippewa Valley probably held about 46,000,000,000 board feet of lumber. Frederick Weyerhaeuser described it as "a logger's paradise, a very large part of its area being heavily forested with the finest quality of white pine timber, while rivers, streams, and lakes offered an excellent network of transportation facilities."

The first sawmill in the Chippewa Valley was probably functioning at what would become Menomonie around 1831. By 1840 Jean Brunet and associates were sawing wood at Chippewa Falls. Floods destroyed these early mills, and the lumbermen rebuilt them. In the late 1800s, Chippewa Falls was said to have the largest sawmill under one roof in the world.

By the 1850s the loggers were binding the sawed pine lumber into rafts which were guided down the lower Chippewa to markets on the Mississippi. Above Chippewa Falls, though, the river was too rough and rocky for large rafts. Masses of individual logs were driven down by log drivers, sometimes called "river pigs." To make the drives more efficient and reliable, the loggers changed the river somewhat, dynamiting troublesome rocks, cutting trees that would snag logs, building up the banks in places, and damming the river and its tributaries. Around 1876 a dam and log-sorting works was built between Eau Claire and Chippewa Falls. In 1878 a large splash dam was built at Little Falls (modern Holcombe), with so much capacity that when fully opened it could raise the Chippewa three feet 100 miles downstream. Over the Chippewa and its tributaries the loggers built at least 148 logging dams, of various sizes and purposes.

The Chippewa River is a popular destination for recreational kayakers and canoers. Paddlers experience a variety of conditions on the river, from calm, slow-moving water to small rapids and whitewater. Fishing is a popular activity: the river is known for musky, smallmouth bass, walleye, and northern pike.

All content from Kiddle encyclopedia articles (including the article images and facts) can be freely used under Attribution-ShareAlike license, unless stated otherwise. Cite this article:
Chippewa River (Wisconsin) Facts for Kids. Kiddle Encyclopedia.