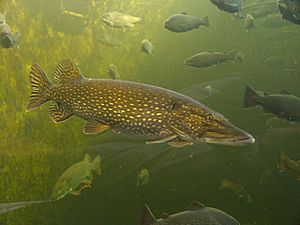 The Northern pike (Esox lucius), has a number of nicknames such as 'Northern', 'Great northern pike', 'Pike', and 'Jack'. It's name literally means 'water wolf'. The Northern pike is a freshwater game fish and the second largest member of the Esox (Pike) family. It is also that family's namesake. In North America they are native to Alaska, Canada and the Upper Midwestern United States. Their natural range also includes Northern Europe and Asia. They are a cold water fish and do best in deep lakes. Northerns are voracious feeders that require large supplies of fish for steady growth. If they are overpopulated in a body of water their growth rate is often stunted.

Northern pike and Muskellunge look very similar and are sometimes confused. The Northern has light colored markings on a dark body (the opposite of the Musky). Also the Northern has a rounded tail fins while the Musky's are pointed. The northern has a long body. It has a large number of very sharp teeth. The northern is the only member of the pike family with spots on its side that are lighter than the body color. Another difference is they have five or less pores under the jaw; muskies have six or more.

Northerns eat other fish; they eat a lot of other fish. They control other fish species from becoming overpopulated. They wait in ambush and can rush forward with tremendous speed.

All content from Kiddle encyclopedia articles (including the article images and facts) can be freely used under Attribution-ShareAlike license, unless stated otherwise. Cite this article:
Northern pike Facts for Kids. Kiddle Encyclopedia.