Buffalo County is a county located in the U.S. state of Wisconsin. As of the 2010 census, the population was 13,587. Its county seat is Alma. The county was created in 1853 and organized the following year.

Buffalo County, founded in 1853, is named for the Buffalo River, which flows from Strum to Alma, Wisconsin, where it empties into the Mississippi River. The Buffalo River obtained its name from the French voyager Father Louis Hennepin, who named it "Riviere des Boeufs" in 1680. The first permanent settlement was established in 1839, located in what is now Fountain City. This settlement was originally named Holmes' Landing after a family that traded with the Sioux and Chippewa. Buffalo County was settled primarily by Swiss, German, and Norwegian immigrants who were drawn to the area by the growing lumber industry, fertile soils, access to the Mississippi, and available land. By 1848 a second community was established called Twelve Mile Bluff, which is now known as Alma.

Agriculture developed during the 1850s on top of the ridges where there were natural prairies and oak savannas, which made working the land much easier.

With the lack of good roads, settlement remained along the Mississippi River where farmers could ship their grain on steamboats. The development of the Northern Rail from Winona, Minnesota allowed for development away from the river, and by 1890 farmers were transporting their goods predominantly by rail.

The Civil War gave a boost to the local economy with the rising demand for wheat, which was the main crop of the county. The post-war period brought a large influx of settlers, however, because of declining soil fertility, many moved west rather than adopt crop rotation and fertilization. With the price of wheat falling, farmers turned to dairy farming, and by the 1880s local creameries had started to appear. 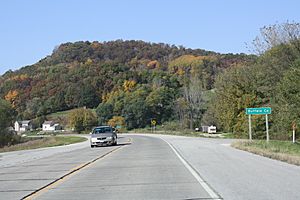 All content from Kiddle encyclopedia articles (including the article images and facts) can be freely used under Attribution-ShareAlike license, unless stated otherwise. Cite this article:
Buffalo County, Wisconsin Facts for Kids. Kiddle Encyclopedia.