Kids Encyclopedia Facts
This page is about the city in Minnesota. For other uses, see Winona (disambiguation).

Winona is a city in and the county seat of Winona County, in the state of Minnesota. Located in picturesque bluff country on the Mississippi River, its most noticeable physical landmark is Sugar Loaf. The city is named after legendary figure Winona, said to have been the first-born daughter of Chief Wapasha (Wabasha) III. The population was 27,592 at the 2010 census.

Valley of the Mississippi from Winona, circa 1898

The city of Winona began on the site of a Native American village named Keoxa. The seat of the Wapasha dynasty, Keoxa was home to a Mdewakanton band of the eastern Sioux.

Non-Native Americans settled the area in 1851 and laid out the town into lots in 1852 and 1853. The original settlers were Yankee immigrants from New England. The population increased from 815 in December, 1855, to 3,000 in December, 1856. In 1856 German immigrants arrived as well. The Germans and the Yankees worked together planting trees and building businesses based on lumber, wheat, steamboating and railroads. For a time, Winona had more millionaires than any other city of its size in the United States.

The railroad and steamboat transportation industries helped Winona grow into a small city that diversified into wheat milling, and lumber production. In 1856, over 1,300 steamboats stopped at Winona. The railway system grew and the Winona Railway Bridge, built of steel and iron with a steam-powered swingspan over the river, was the second railway bridge to span the Mississippi. The first train crossed on July 4, 1891 and the bridge served the Green Bay & Western (GBW) and Burlington Route for the next 94 years until it was closed in 1985 and dismantled in the fall of 1990. In 1892, a wagon toll-bridge over the Mississippi, a steel high-bridge, was completed and remained in service until 1942.

Winona has two historic districts listed on the National Register of Historic Places that combine into a single local historic district administered by the city's Heritage Preservation Commission. 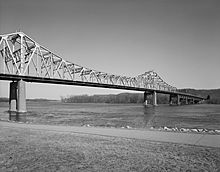 Winona's weather station records the warmest climate of any in Minnesota, with a normal year-round average (1971–2000) temperature of 48.9 °F, compared to 43.2° in Austin to the city's southwest or 45.4° in Minneapolis, to the northwest, which experiences a strong urban heat island effect. Temperatures are generally very mild by Minnesota standards year-round; the January mean is 17.6°, while that of July is 75.8°.

The United States Office of Management and Budget has designated Winona as the principal city of the Winona, MN Micropolitan Statistical Area (µSA).

There were 10,449 households of which 20.7% had children under the age of 18 living with them, 36.4% were married couples living together, 8.5% had a female householder with no husband present, 3.2% had a male householder with no wife present, and 51.9% were non-families. 35.6% of all households were made up of individuals and 12.6% had someone living alone who was 65 years of age or older. The average household size was 2.24 and the average family size was 2.84. 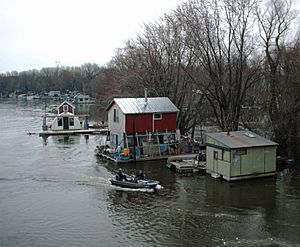 There were 10,301 households out of which 23.9% had children under the age of 18 living with them, 40.4% were married couples living together, 8.4% had a female householder with no husband present, and 48.3% were non-families. 35.2% of all households were made up of individuals and 12.8% had someone living alone who was 65 years of age or older. The average household size was 2.27 and the average family size was 2.94.

All content from Kiddle encyclopedia articles (including the article images and facts) can be freely used under Attribution-ShareAlike license, unless stated otherwise. Cite this article:
Winona, Minnesota Facts for Kids. Kiddle Encyclopedia.