Rochester is a city founded in 1854 in the U.S. state of Minnesota and is the county seat of Olmsted County located on the Zumbro River's south fork in Southeast Minnesota. It is Minnesota's third-largest city and the largest city located outside the Minneapolis-St. Paul-Bloomington Metropolitan Statistical Area. According to the 2020 United States Census, the city had a population of 121,395. The surrounding metropolitan area has a population of 226,329. It is the home of the Mayo Clinic and a major IBM facility, one of the company's largest at its peak. 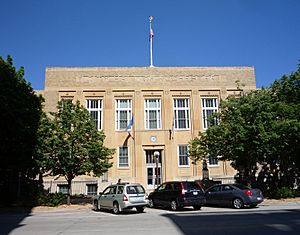 Rochester was founded in 1854, and platted in 1855. Rochester developed as a stagecoach stop between Saint Paul, Minnesota, and Dubuque, Iowa. When the railroad arrived in the 1860s, it brought new residents and business opportunities. In 1863, Dr. William W. Mayo arrived as the examining surgeon for draftees in the Civil War. The community was named after Rochester, New York.

On August 21, 1883, the Great Tornado demolished much of Rochester, leaving 37 dead and about 200 injured. As there was no medical facility at the time, Mayo and his two sons worked together to care for the wounded. Donations of $60,000 were collected and the Sisters of St. Francis, assisted by Mayo, opened a new facility named St. Marys Hospital in 1889. The Mayo practice grew and is today among the largest and most well-respected medical facilities in the world. Many famous people from around the world, including former Presidents Franklin D. Roosevelt, Harry S. Truman, George H. W. Bush, Gerald Ford, and Ronald Reagan, have visited Rochester as patients of the Mayo Clinic. Rochester has also been hit by two F4 tornadoes since 1950 (the first on May 10, 1953 and the other on September 16, 1962.) Rochester celebrated its sesquicentennial in 2004.

Rochester is in Olmsted County, one of only four counties in Minnesota without a natural lake. Artificial lakes exist in the area, including Silver Lake, a dammed portion of the South Fork Zumbro River just below the convergence with Silver Creek near the city center. Silver Lake was once used as a cooling pond when the coal-burning power plant was operated by Rochester Public Utilities, at the lake. When operational, the RPU coal plant's heated water output prevented the lake from generally freezing over during the winter months; attracting large numbers of migrating giant Canada geese.

Rochester has many parks; the largest being Silver Lake and Soldiers Field. A major flood in 1978 led the city to embark on an expensive flood-control project that involved altering many nearby rivers and streams.

Rochester features a humid continental climate, with hot summers and very cold winters. The city features four distinct seasons. Rochester sees on average 30 inches (760 mm) of rainfall and 48 inches (120 cm) of snowfall per year. Significant snow accumulation is common during the winter months. Spring and fall are transitional seasons, with a general warming trend during the spring and a general cooling trend during the fall. However, it is not uncommon to see some snowfall during the early months of spring and the later months of fall. Rochester is the second windiest city in the United States, with wind speeds averaging 12.6 mph. January and April are the windiest months on average, according to The Weather Channel.

There were 43,025 households, of which 31.9% had children under the age of 18 living with them, 49.4% were married couples living together, 9.5% had a female householder with no husband present, 3.5% had a male householder with no wife present, and 37.6% were non-families. 30.1% of all households were made up of individuals, and 8.8% had someone living alone who was 65 years of age or older. The average household size was 2.42 and the average family size was 3.04.

A number of Rochester buildings are on the National Register of Historic Places, including the historic Chateau Theatre, which in 2015 was bought by the city for preservation, and Avalon Music, formerly a hotel important in the local civil rights movement.

In the summer, every Thursday the city puts on "Thursdays on First" where local restaurants and artists can set up booths all along First Avenue downtown Rochester. There are a few stages where bands perform and provide entertainment. There are also a number of street musicians sitting on walls or standing on the sidewalks.

The oldest cultural arts institution in the community, Rochester Symphony Orchestra & Chorale was founded in 1919 as a professional performing arts organization called the Rochester Orchestra. Its earliest ensemble — the Lawler-Dodge Orchestra — was founded in 1912 as a volunteer orchestra, driven by Daisy Plummer, wife of world-famous Mayo Clinic physician, Dr. Henry Plummer, and directed by Harold Cooke. In early years, the Orchestra appeared in the former Chateau Theatre where they performed background music for silent movies. 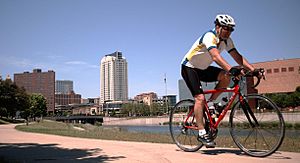 Rochester has a network of bike and pedestrian paths.

Rochester's park system is large, with more than 100 sites covering 5 square miles (13 km2). The city maintains 85 miles (137 km) of paved trails. The south terminus of the Douglas State Trail is built on an abandoned railroad grade.

Rochester is served by three U.S. highways (U.S. 14, U.S. 52, and U.S. 63), and the southern edge of Rochester is skirted by Interstate Highway 90 and State Highway 30. Olmsted County Highway 22 is also a main highway in the city because it circles most of Rochester. A combination of skyways and subterranean walkways, subways, link most downtown buildings, which residents often use to avoid the extreme winter weather conditions. Public bus transit is run by Rochester Public Transit. Its operations are carried out by First Transit.

Rochester International Airport is located seven miles south of downtown. The airport is the second busiest commercial airport in Minnesota It has direct flights to Atlanta, Chicago, and Minneapolis.

A proposed Twin Cities-Rochester rail link has been the subject of a series of studies since the late 1980s. Rochester previously had service to Chicago to the southeast and to Rapid City, South Dakota to the west until the Chicago and North Western Railway's Rochester 400 streamliner ended service in 1963.

Golf Digest and Golf for Women both ranked Rochester as the fifth best golf market in the midwest in 2006.

In 2009, US News and World Report ranked Rochester in the Top Ten Best Places to Grow Up and ninth for Best Cities for job seeking retirees.

Rochester was ranked the 5th best city to retire in by the Milken Institute.

Mayo Clinic forms the core of Rochester's economy. As of 2016, it employs 34,180 people and draws more than 2 million visitors annually. The clinic's many facilities, along with hotels, restaurants and retail stores, comprise nearly all of the city's downtown. Excluding the state government, Mayo Clinic is the largest employer in Minnesota. Other care providers, including the Rochester Federal Medical Center, are significant employers.

IBM's Rochester campus is an R&D and manufacturing center. It designed and produced IBM’s midrange computer series, has been home to the first Blue Gene prototype, and contributed the servers for Roadrunner. Seven employees at the Rochester IBM campus created IBM Employees Credit Union, which is now Think Mutual Bank, a chain of banks in the Rochester and Twin Cities metropolitan areas.

The economy of Rochester is also influenced by the agricultural nature of the region. There are multiple dairy producers that are active in the area. In addition, Kerry Flavours and Ingredients, a subsidiary of the global Irish company called Kerry Group, maintains a production plant in Rochester that specializes in fermented ingredients, found in breads, meats and other processed foods. 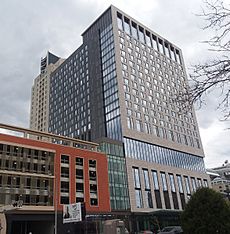 Downtown Hilton, completed in 2019, is one of the first major DMC projects.

In 2013, Governor Mark Dayton signed a bill known as Destination Medical Center (DMC). It intends to increase Minnesota's tax base, and promote business and economic growth throughout the state. Because of this legislation, The Mayo Clinic will invest in $3.5 billion to upgrade patient rooms, add additional workspace, and build research and administrative buildings.

The main developments of this plan will be in the DMC sub-districts. The Downtown Waterfront district will cover The Government Center, The Civic Center, and most areas near the Zumbro River. The Central Station district includes Central Park and most of Civic Center Drive, aimed to become a transportation hub of the city. St. Marys Place will cover St. Marys hospital and St. Marys Park, as well as most of 2nd Street. The Heart of the City will feature the Mayo Clinic campus and major residential, commercial, and retail companies. The Discovery Square area will include scientific and technology research facilities. Lastly, The UMR and Recreation district will feature Soldiers Field and the University of Minnesota Rochester campus. 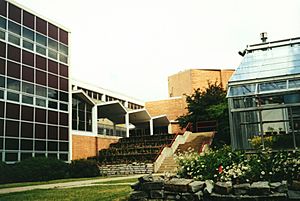 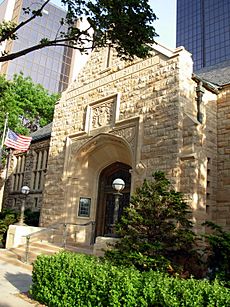 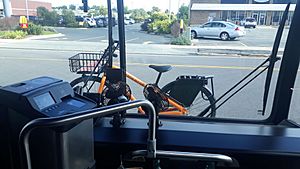 Rochester is served by three U.S. highways (U.S. 14, U.S. 52, and U.S. 63), and the southern edge of Rochester is skirted by Interstate Highway 90 and State Highway 30. Olmsted County Highway 22 is also a main highway in the city. A combination of skyways and subterranean walkways link most downtown buildings, which residents often use to avoid harsh winter weather conditions. Public bus transit is run by Rochester Public Transit. Its operations are carried out by First Transit. The city Rochester encourages biking through its numerous trails and to facilitate the biking program all the city buses have bike carriers for easy transportation of bikes.

Rochester International Airport is located seven miles south of downtown. The airport is the second busiest commercial airport in Minnesota. It has direct flights to Atlanta, Chicago, Denver, and Minneapolis, with occasional charter flights servicing Riverside Resort in Laughlin, Nevada. Nonstop flights to Phoenix and Fort Myers will begin in early 2022.

Rochester's last passenger rail service, to Chicago to the southeast and Rapid City, South Dakota to the west, ended when the Chicago and North Western Railway's Rochester 400 streamliner ended service in 1963. The closest Amtrak station is at Winona, Minnesota, 45 miles to the east. Travelers are able to purchase tickets from Amtrak for a shuttle bus that connects with the daily Empire Builder at La Crosse, Wisconsin.

All content from Kiddle encyclopedia articles (including the article images and facts) can be freely used under Attribution-ShareAlike license, unless stated otherwise. Cite this article:
Rochester, Minnesota Facts for Kids. Kiddle Encyclopedia.