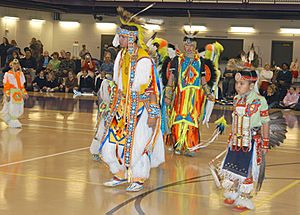 The Ho-Chunk, also called Winnebago, are a Siouan-speaking tribe of Native Americans. Their homeland was in the present-day state of Wisconsin. In the 19th century they were removed to reservations in Nebraska, Minnesota, Iowa and South Dakota. Today there are two federally recognized Ho-Chunk tribes: the Ho-Chunk Nation of Wisconsin and the Winnebago Tribe of Nebraska.

Since the late 20th century, the two tribal councils have built gambling casinos on their lands. These are used to earn money to help the tribes. The Ho-Chunk Nation is working on restoring their language. They have developed a Hocąk-language Mobile app for the iPhone.

All content from Kiddle encyclopedia articles (including the article images and facts) can be freely used under Attribution-ShareAlike license, unless stated otherwise. Cite this article:
Ho-Chunk Facts for Kids. Kiddle Encyclopedia.