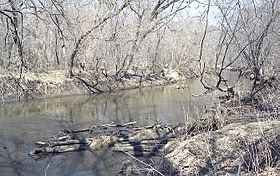 The North Fork of the Zumbro River in Zumbrota

The Zumbro River is a tributary of the Mississippi River in the Driftless Area of southeastern Minnesota in the United States. It is 64.6 miles (104.0 km) long from the confluence of its principal tributaries and drains a watershed of 1,428 square miles (3,700 km2).

The river's name in English is a change from its French name Rivière des Embarras (Embarrass River/Obstruction River) due to its mouth located near Pine Island in the Mississippi River.

All content from Kiddle encyclopedia articles (including the article images and facts) can be freely used under Attribution-ShareAlike license, unless stated otherwise. Cite this article:
Zumbro River Facts for Kids. Kiddle Encyclopedia.