Mason City is a city and the county seat of Cerro Gordo County, Iowa, United States. The population was 27,338 in the 2020 census, a decline from 29,172 in the 2000 census. The Mason City Micropolitan Statistical Area includes all of Cerro Gordo and Worth counties. It is commonly referred to as the "River City", as the city grew up centered on the Winnebago River.

The region around what would later be first called "Shibboleth" was a summer home to the Sioux and Winnebago natives. The first settlement was made at Shibboleth in 1853 at the confluence of the Winnebago River and Calmus Creek. The town had several names: Shibboleth, Masonic Grove, and Masonville, until the name Mason City was adopted in 1855, in honor of a founder's son, Mason Long.

In 1854, John McMillin opened the first store, and Dr. Silas Card opened the first medical practice in the area. Lizzie Thompson established the first schoolhouse in a log cabin in 1856. The United States Post Office Department started service to the town in 1857. Mason City was named as the county seat in 1858. 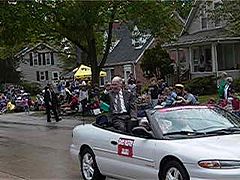 Mason City, above all else, is known for its outstanding musical heritage, consistently producing successful performers and educators. Mason City's "favorite son" Meredith Willson grew up in Mason City, having played in the Mason City Symphonic Band as a student at Mason City High School. Willson's crowning achievement was the famous musical The Music Man, which was first a successful Broadway musical, then a popular film. Many of the characters in it were taken from people Willson knew from his childhood in Mason City. The show first opened on Broadway in 1957 and became a hit, with a three-year run at the Majestic Theatre, followed by an additional 1,375 performances at the Broadway Theatre. The Music Man garnered many awards, including 5 Tony Awards in 1958. The 1962 film version starred Robert Preston, Shirley Jones, and Buddy Hackett. It was both a critical and commercial success, being nominated for six Academy Awards (including Best Picture) and winning one (Best Musical Score).

In late May or early June Mason City holds an annual celebration of its musical heritage called The North Iowa Band Festival. Bands from across the midwest compete during the parade to be named the best band. The home bands, Mason City High School and Newman Catholic High School Marching Bands, do not compete but do perform in the parade. 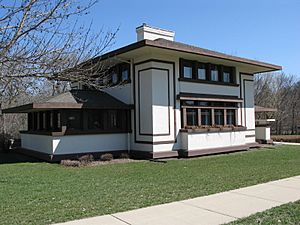 Architecture and the Prairie School

Mason City is widely known for its collection of Prairie School architecture, the largest concentration of any city in Iowa. At least 32 houses and one commercial building were built in the Prairie Style between 1908 and 1922, 17 of which are listed on the National Register of Historic Places and eight more are contributing properties to a historic district.

The first two Prairie structures, the Dr. G.C. Stockman House (1908) and the Park Inn Hotel and City National Bank Buildings (1909–1910) were both designed by Frank Lloyd Wright. The hotel and bank, a mixed-use development at the corner of State and Federal Avenues, was the first to be commissioned by local attorneys James E. E. Markley and James E. Blythe. Within a year, Wright was hired to design the Stockman House by Markley's neighbor. 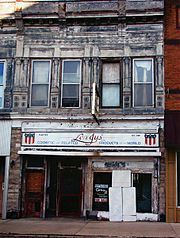 Both the Park Inn Hotel and Stockman House suffered from neglect and unsympathetic alterations before they were saved by community organizations. In 1989, the Stockman House was moved four blocks to prevent its demolition; it was subsequently restored and opened to the public by the River City Society for Historic Preservation. Likewise, Wright on the Park, Inc. began restoration on the Park Inn Hotel in 2005 and the former City National Bank building in 2007. The organization will reopen both buildings as a boutique hotel in August 2011. The Park Inn Hotel is last remaining of the few hotels that Wright completed during his career and is considered a prototype for Wright's Imperial Hotel.

The Rock Glen and Rock Crest National Historic district is a small enclave of single-family homes situated along the banks of Willow Creek five blocks east of downtown. It is the largest collection of prairie style homes in a natural setting in the world.

In addition to Prairie Style architecture, Mason City is home to extensive Victorian, Craftsman, and Bungalow style homes, as well as historic commercial structures dates from between 1892 and 1940, including the Brick and Tile Building at the intersection of State and Delaware Streets.

The Mason City Public Library was designed by Chicago architects Holabird and Root in 1939.

The Len Jus Building on North Federal Avenue has an extremely rare sheet-metal facade, it had been placed on the Iowa Historic Preservation Alliance's Most Endangered list because of its poor repair and indifferent ownership, but is now being rehabilitated by the new owner.

Mason City, Iowa, and Montegrotto Terme, Italy, created a Sister City relationship in the spring of 2005. This relationship creates a bridge between the two cities that citizens can use to build new and lasting friendships and relationships.

Mason City has a very diverse employment base covering multiple sectors of the economy including Manufacturing, Health, Financial Services, Technology and Education, with no one sector or employer dominating the market.

The largest employer is MercyOne North Iowa Medical Center, formerly known as Mercy Medical Center-North Iowa, and before that as St. Joseph Mercy Hospital, is the region's largest hospital. The facility serves 14 counties across northern Iowa. In June 2019, the hospital opened a new $10.6 million behavioral center.

Mason City is home to several institutions of higher education, including the North Iowa Area Community College (formerly Mason City Junior College), a branch of Buena Vista University which is located on the NIACC campus, and Purdue University Global formerly known as Kaplan University. Purdue University to acquire Mason City Kaplan campus Hamilton College, a business school, has operated in the city since 1900.

Mason City has some history of minor league and amateur sports teams despite its relatively small size.

The North Iowa Bulls are a junior ice hockey team that first began play in the 2011 as member of the North American 3 Hockey League (NA3HL). The Bulls won the league championship in 2013, 2014, 2016, and 2021, while also winning the Tier III National Championship in 2013 and 2015. The Bulls moved up to the Tier II North American Hockey League (NAHL) and rebranded the Tier III team as the Mason City Toros in 2021. The North Iowa Outlaws junior hockey team previously played in the NAHL from 2005 until 2010, when they relocated to Onalaska, Wisconsin, to become the Coulee Region Chill. The North Iowa Huskies played in the United States Hockey League from 1983 to 1999 and then moved the Cedar Rapids.

River City Rugby Football Club was established in Mason City in 1972. The Club competes in two separate two-month seasons, April and May, and September and October. The Club celebrated its 40th anniversary in June 2012. Over 250 players have played for the Club since it first began. The Club competes against teams from Iowa, Minnesota, and Nebraska in the Midwest Division 3.

The majority of Mason City is served by Iowa Highway 122 and U.S. Route 65. U.S. Route 18 now bypasses the city to the south. Interstate 35 (eight miles to the west) serves the city as well.

Mason City is home to the Iowa Traction Railway. The IATR is one of the last surviving electric interurban railroads in the U. S., and the only one that still uses electric locomotives to haul freight in regular service.

Mason City also is served by the Canadian Pacific Railway and Union Pacific Railroad. The Canadian Pacific track is part of its US subsidiary the Dakota, Minnesota and Eastern Railroad ( former I&M Rail Link and Milwaukee Road trackage. The Union Pacific's track was inherited from the Chicago and North Western Transportation Company when it bought it in the 1990s. Much of the trackage is composed of the old Chicago, Rock Island, and Pacific Railroad's (aka Rock Island Railroad )

The city also hosts Mason City Municipal Airport, (MCW) with commercial service by United Airlines. It is the airport from which early rock and roll stars Buddy Holly, Ritchie Valens and The Big Bopper (J.P. Richardson) took off on the night of February 3, 1959, after a concert at the Surf Ballroom in nearby Clear Lake, Iowa, en route to Fargo, N.D. The plane crashed a few miles west of the airport in an historic event later referred to as the Day the Music Died. Holly, Valens, Richardson and pilot Roger Peterson all died in the accident.

All content from Kiddle encyclopedia articles (including the article images and facts) can be freely used under Attribution-ShareAlike license, unless stated otherwise. Cite this article:
Mason City, Iowa Facts for Kids. Kiddle Encyclopedia.