The Park Inn Hotel was the third hotel designed by Wright and served as the prototype for Midway Gardens in Chicago and the Imperial Hotel, Tokyo, which was torn down in 1968.

In 1907, when law partners James E. Blythe and J. E. E. Markley were looking for an architect to compete in quality with the eight-story bank building that would be built across the corner, they didn't hesitate to give the commission to Frank Lloyd Wright, a young architect who was building a reputation in the Chicago area. For them Wright would build a complex, multi-purpose building that would give them multiple income streams. Their law offices would be on the second floor of the building's narrower central waist and the hotel's east wing, surrounded on the south by a two-story banking room with rental office space above. On the north would be a 42-room hotel, with basement shops beneath the bank and hotel. Wright managed to pack all these functions into an aesthetically well-integrated building that architecturally would be the bridge between Wright's Prairie School period and his Midway Gardens and the Imperial Hotel to follow.

Wright's drawings of the bank and hotel are dated from as early as December 17, 1908. Construction was begun on the first of April 1909, with supervision by Wright until his departure for Europe in late October of that year. At that time William Drummond from Wright's Oak Park Studio in Oak Park, Illinois, took over the supervision of its construction and designed a nearby Prairie style home during his visits. The law office of developer-owners Blythe and Markley was open for business on August 29, 1910, with the gala opening of the entire structure September 10 of that year. Wright returned to the Midwest from his year in Europe in October 1910.

Unfortunately for the Historic Park Inn Hotel, a new 250-room hotel with all the latest amenities was constructed in Mason City in 1922, creating stiff competition for the Park Inn Hotel. In addition, the farm crisis led to the closing of the City National Bank, which was merged into another local bank. By 1925, four of the five banks in Mason City had failed. In 1926, the City National Bank building was sold separately and underwent an unsympathetic remodeling into a new commercial use in that year. The upper floors of the Park Inn Hotel were eventually subdivided into rental apartments and over time the unique Prairie School design elements such as stained-glass skylights, fixtures, furniture and woodwork were removed or lost. For the next several decades, the Park Inn experienced a gradual decline that ended with its closure in 1972. 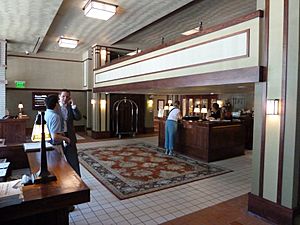 The restored lobby of the Historic Park Inn. 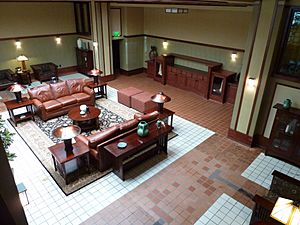 The restored Skylight Room of the Historic Park Inn.

The Park Inn Hotel received a complete interior and exterior renovation thanks to numerous grants, as well as coordination at the local level. This included a comprehensive restoration of the brick and terra-cotta façade, replacement of the art glass skylight windows, and a complete interior reconstruction.

Wright on the Park, Inc., the organization overseeing the work, purchased the adjacent City Bank Building and reunited the Park Inn Hotel with the City National Bank. The bank building was refitted with an elevator and provides six additional rooms for the hotel; the old bank lobby is now a hotel ballroom.

The restoration was completed in September 2011. It builds on Mason City's rich architectural heritage, which includes a history deep in Prairie School architecture from not just Wright, but many of his associates who built in Mason City, including Walter Burley Griffin, Marion Mahony Griffin, William Eugene Drummond, and Francis Barry Byrne.

All content from Kiddle encyclopedia articles (including the article images and facts) can be freely used under Attribution-ShareAlike license, unless stated otherwise. Cite this article:
Park Inn Hotel Facts for Kids. Kiddle Encyclopedia.