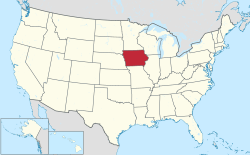 Map of the United States with Iowa highlighted

Iowa is divided into 99 counties and has 947 cities. Every incorporated place in Iowa is called a "city," regardless of population. Incorporated cities can choose one of six forms of municipal government that differ primarily on how the legislative and administrative responsibilities are separated: mayor-council, mayor-council with an appointed manager,council-manager-at-large, commission, council-manager-ward, home rule charter or special charter. Most operate as mayor–council. 490 of Iowa's 947 cities—slightly more than half—have fewer than 500 residents. 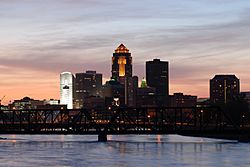 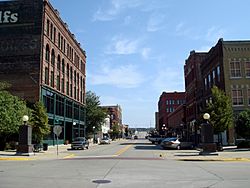 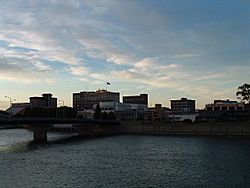 All content from Kiddle encyclopedia articles (including the article images and facts) can be freely used under Attribution-ShareAlike license, unless stated otherwise. Cite this article:
List of cities in Iowa Facts for Kids. Kiddle Encyclopedia.