Anamosa is a city in Jones County, Iowa, United States. The population was 5,533 at the 2010 census. It is the county seat of Jones County.

What is now Anamosa was founded as the settlement of Buffalo Forks in 1838 and incorporated as Lexington in 1856. Lexington was a popular name for towns at that time, so when Lexington chose to become incorporated as a city in 1877, the name was changed to Anamosa to avoid mail delivery confusion. There are many stories on how Anamosa was chosen as a name. Some believe it was named for a local Native American girl named Anamosa, meaning "white fawn", while others say it means "You walk with me."

The romantic origin of the naming of the town of Anamosa comes from its early history. A Native American family was passing through town in 1842. The family stayed at the Ford House. The little girl, a Native American Princess, named Anamosa, endeared herself to the townspeople and following the family's departure from town, local citizens decided to name their town after her.

The Wapsipinicon River flows through Anamosa. According to legend, a Native American maiden and her lover threw themselves off a bluff overlooking the Wapsipinicon River; one was named Wapsi, the other Pinicon. Origins of this legend are unconfirmed.

Anamosa was named the Pumpkin Capital of Iowa by the Iowa State Legislature in 1993 and hosts Pumpkinfest, a pumpkin festival and weigh-off, each October.

Anamosa was named the last over-night city for RAGBRAI XL for 2012.

The Anamosa Boot Hill Cemetery is still open today and is northwest of the town.

The Wapsipinicon River runs through the city of Anamosa. Anamosa is served by U.S. Route 151 and Iowa Highway 64.

There were 1,941 households of which 30.1% had children under the age of 18 living with them, 41.4% were married couples living together, 13.4% had a female householder with no husband present, 5.2% had a male householder with no wife present, and 40.1% were non-families. 34.5% of all households were made up of individuals and 17.1% had someone living alone who was 65 years of age or older. The average household size was 2.25 and the average family size was 2.87. 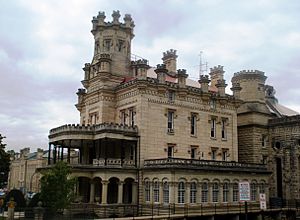 Motorcycles are a common sight in Anamosa. Anamosa is home to J&P Cycles who supply aftermarket motorcycle parts and accessories. In addition to J&P Cycles the National Motorcycle Museum, which features over 300 vintage motorcycles, including the original "Captain America bike" from the movie Easy Rider.

Anamosa was the birthplace and burial place of the regionalist artist Grant Wood; he is buried in Riverside Cemetery, under a large monument of a recumbent lion. Visitors can view a collection of satirical interpretations of his most famous work American Gothic at the Grant Wood Art Gallery on Main Street.

The unincorporated town of Stone City is located a few miles northwest of Anamosa and was the location for some of Grant Wood's paintings. Historic buildings built of local stone are still standing. The quarry that supplied the limestone still exists today as Weber Stone Company.

Controversy arose in Anamosa in the 2000s over the redistricting of election wards in the city. Because the boundaries of the city's four wards were drawn to encompass equal numbers of residents, and because the inmates of the Anamosa State Penitentiary — who are ineligible to vote — were counted among the population of the second ward, the voting population of the second ward was significantly smaller than that of any of the other three wards. Consequently, the power of each vote in the second ward was much greater than the power of a vote in any of the city's other wards. In 2007, city residents voted to end the system of wards; since 2008, all city council elections have been at-large.

All content from Kiddle encyclopedia articles (including the article images and facts) can be freely used under Attribution-ShareAlike license, unless stated otherwise. Cite this article:
Anamosa, Iowa Facts for Kids. Kiddle Encyclopedia.