American Gothic is a 1930 painting by Grant Wood in the collection of the Art Institute of Chicago. It depicts a farmer standing beside his daughter – often mistakenly assumed to be his wife.

American Gothic is one of the most familiar images in 20th-century American art and has been widely parodied in American popular culture. In 2016–17, the painting was displayed in Paris at the Musée de l'Orangerie and in London at the Royal Academy of Arts in its first showings outside the United States. 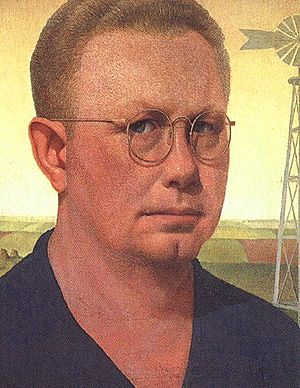 In August 1930, Grant Wood, an American painter with European training, was driven around Eldon, Iowa, by a young painter from Eldon, John Sharp. Looking for inspiration, Wood noticed the Dibble House, a small white house built in the Carpenter Gothic architectural style. After obtaining permission from the Jones family, the house's owners, Wood made a sketch the next day in oil on paperboard from the house's front yard.

He would not return to Eldon again before his death in 1942, although he did request a photograph of the home to complete his painting.

Wood decided to paint the house along with "the kind of people I fancied should live in that house."

He recruited his sister Nan to model the woman, dressing her in a colonial print apron mimicking 19th-century Americana. The man is modeled on Wood's dentist, Dr. Byron McKeeby from Cedar Rapids, Iowa.

The Depression-era understanding of the painting as a depiction of an authentically American scene prompted the first well-known parody, a 1942 photo by Gordon Parks shot in Washington, D.C.

American Gothic is a frequently parodied image. It has been lampooned in Broadway shows such as The Music Man, television shows such as Green Acres and "The Dick Van Dyke Show". It has also been parodied in marketing campaigns and by couples who recreate the image by facing a camera, one of them holding a pitchfork or other object in its place.

All content from Kiddle encyclopedia articles (including the article images and facts) can be freely used under Attribution-ShareAlike license, unless stated otherwise. Cite this article:
American Gothic Facts for Kids. Kiddle Encyclopedia.