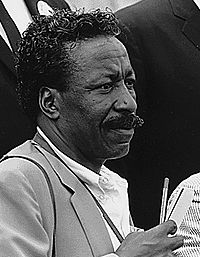 Gordon Roger Alexander Buchanan Parks (November 30, 1912 – March 7, 2006) was an American photographer, musician, writer and movie director. He was the first African-American to produce and direct major movies. He was best remembered for his iconic photos of poor Americans during the 1940s.

He created the blaxploitation genre. He was the director of the movie Shaft in 1971.

Parks was born in Fort Scott, Kansas. He died due to cancer in Manhattan, New York. Parks was 93.

All content from Kiddle encyclopedia articles (including the article images and facts) can be freely used under Attribution-ShareAlike license, unless stated otherwise. Cite this article:
Gordon Parks Facts for Kids. Kiddle Encyclopedia.