Greenburgh is a town in the western part of Westchester County, New York. The population was 95,397 at the time of the 2020 census.

Greenburgh developed along the Hudson River, long the main transportation route. It was settled by northern Europeans in its early years, primarily of Dutch and English descent. Residents were active during the American Revolutionary War.

Greenburgh is bordered by the city of Yonkers on the south, the town of Mount Pleasant to the north, and to the east by the city of White Plains and the town of Scarsdale. The western boundary is the Hudson River. The Tappan Zee Bridge connects Tarrytown in Greenburgh with South Nyack in Orangetown, New York.

Communities and locations in Greenburgh 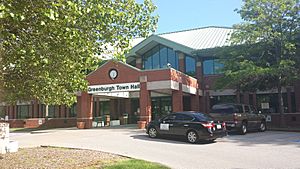 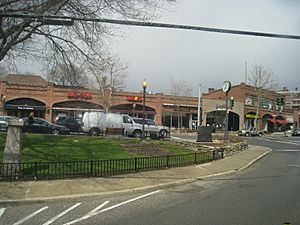 Hartsdale, an unincorporated hamlet in the town of Greenburgh

The unincorporated area of Greenburgh consists of the formerly rural areas of the town outside the villages. While hamlets are not recognized as municipal entities in New York State, most properties in unincorporated Greenburgh are classified within one of the town's three federally recognized zones, each known as a census-designated place. These generally correspond to a fire district.

Other unincorporated areas in Greenburgh outside of the three main CDPs include the neighborhoods of:

Interstate 87 (the New York State Thruway), the Cross Westchester Expressway, the Saw Mill River Parkway, the Bronx River Parkway, and the Sprain Brook Parkway all pass through the town. US routes include U.S. Route 9. State routes that traverse the town are Route 9A, Route 100 (as well as A, B and C) and Route 119. 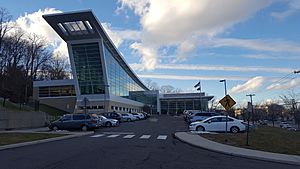 The Westchester Library System headquarters are in the town, in Elmsford. As of 2014, The income per capita in Greenburgh is $55,049. The median household income is $100,282.

All content from Kiddle encyclopedia articles (including the article images and facts) can be freely used under Attribution-ShareAlike license, unless stated otherwise. Cite this article:
Greenburgh, New York Facts for Kids. Kiddle Encyclopedia.