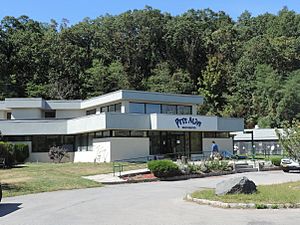 Elmsford is a village in Westchester County, New York, United States. It is part of the New York metropolitan area. Roughly one mile square, the village is fully contained within the borders of the town of Greenburgh. As of the 2010 census, the population of Elmsford was 4,664.

Elmsford was largely farmland throughout its early history. The construction of railroads in the late 19th century brought new prominence to the area, and in 1910 it was incorporated as a village.

The area was known from colonial times as "Storm's Bridge" and later, "Hall's Corners", names derived from the principal landowners of the times. In 1870, the growing village was officially renamed "Elmsford" in honor of a local landmark, a giant elm tree (since deceased). The names Elmsford and Storm's Bridge are reminders of the nearby Saw Mill River, which once had significant tributaries flowing through the village.

Revolutionary War hero Isaac Van Wart is buried at the colonial-era cemetery of the Dutch Reformed Church (Rte. 9A). In 1780, Van Wart and fellow militiamen John Paulding and David Williams captured the British spy Major John André, a crucial informant to Benedict Arnold. The village still has streets named for each of the three patriots.

A longstanding legend holds that Elmsford is the birthplace of the term "cocktail". According to the tale, a local colonial tavern (sometimes said to be established by town father Isaac Storm) had run out of wooden stirrers during the war and started using the quills of roosters' tailfeathers to stir their drinks; a more embellished version holds that the roosters were plundered from nearby Tory farmers.

The Elmsford Reformed Church and Cemetery was listed on the National Register of Historic Places in 1983.

Elmsford's road system connects to numerous major highways and thoroughfares, including Interstate 287, the Saw Mill River Parkway, the Sprain Brook Parkway and Route 9A; the North County Trailway and South County Trailway bicycle paths terminate there. Convenient to White Plains, Yonkers, New York City, and Connecticut, the village is a significant center of commercial traffic and distribution. It is home to the large Local 456 of the Teamsters union.

The village's public schools are run by the Elmsford Board of Education and include Dixson Primary, Alice E. Grady Elementary and Alexander Hamilton Junior/Senior High School. The village is also home to the private Roman Catholic elementary school Our Lady of Mount Carmel, which is affiliated with the Catholic parish of the same name and which was established in 1929.

Dedicated in 1996, Carol Nichols Park has facilities for softball, basketball, tennis as well as a gated "kiddie park" and Sprinkler Park (attendant) for small children.

The town has had an animal shelter since the 1930s. In 1995 the shelter, Central Westchester Humane Society, moved to a location on Warehouse Lane South. The shelter was replaced by Pets Alive Westchester, and later Paws Crossed Animal Rescue, the current owner.

There were 1,618 households out of which 32.0% had children under the age of 18 living with them, 47.5% were married couples living together, 13.2% had a female householder with no husband present, and 32.0% were non-families. 25.5% of all households were made up of individuals and 6.8% had someone living alone who was 65 years of age or older. The average household size was 2.88 and the average family size was 3.39.

All content from Kiddle encyclopedia articles (including the article images and facts) can be freely used under Attribution-ShareAlike license, unless stated otherwise. Cite this article:
Elmsford, New York Facts for Kids. Kiddle Encyclopedia.