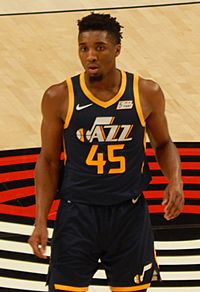 Donovan Vernell Mitchell Jr. (born September 7, 1996) is an American professional basketball player. He plays a shooting guard for the Utah Jazz of the National Basketball Association (NBA). He was selected by the Denver Nuggets with the 13th overall pick in the 2017 NBA draft. He was traded on draft night to the Utah Jazz. During his rookie season, Mitchell was named to the NBA All-Rookie First Team and won the 2018 Slam Dunk Contest. He was born in Elmsford, New York.

On March 12, 2020, during the 2019–20 coronavirus pandemic, Mitchell was reported to have tested positive for COVID-19. His teammate Rudy Gobert also contracted the virus as well.

All content from Kiddle encyclopedia articles (including the article images and facts) can be freely used under Attribution-ShareAlike license, unless stated otherwise. Cite this article:
Donovan Mitchell Facts for Kids. Kiddle Encyclopedia.