Wolfeboro is a town in Carroll County, New Hampshire, United States. The population was 6,416 at the 2020 census. A resort area situated beside Lake Winnipesaukee, Wolfeboro includes the village of Wolfeboro Falls. 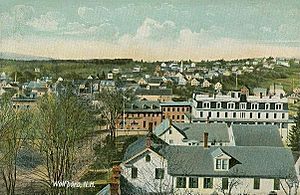 The town was granted by Colonial Governor Benning Wentworth in 1759 to four young men of Portsmouth, and named Wolfeborough in honor of English General James Wolfe, who had been victorious at the Battle of the Plains of Abraham in 1759. In 1763, 2,300 acres (930 ha) were added to the 60 acres (24 ha) reserved for the governor. Colonial Governor John Wentworth, his nephew, established an estate on the site, known as Kingswood. Built in 1771 beside what is now called Lake Wentworth, this was the first summer country estate in northern New England. Settled in 1768, the town was incorporated in 1770.

Over the years Wolfeboro, whose town motto is "The Oldest Summer Resort in America", became a popular summer colony, particularly for families from Boston and southern New Hampshire. Prince Rainier and Princess Grace of Monaco, Kurt Vonnegut, Drew Barrymore and Jimmy Fallon have spent time in Wolfeboro. In August 2007, French president Nicolas Sarkozy vacationed there.

In May 2014, it was discovered that 82-year-old police commissioner Robert Copeland had been overheard in a cafe two months earlier using a racial epithet to refer to President Barack Obama. Copeland acknowledged in an email to his colleagues that he did in fact use the word, saying "for this, I do not apologize — he meets and exceeds my criteria for such." At a subsequent meeting with residents, Copeland refused calls for his resignation. A few days later, he submitted his resignation. 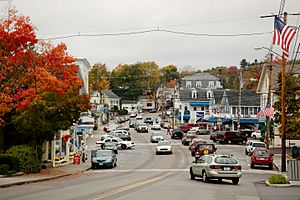 View of Main Street in the fall

The main village of the town, where 2,838 people resided at the 2010 census, is defined as the Wolfeboro census-designated place (CDP), and is located at the head of Wolfeboro Bay on Lake Winnipesaukee, at the junction of New Hampshire routes 28 and 109.

According to the United States Census Bureau, the town has a total area of 58.5 square miles (152 km2), of which 47.9 square miles (124 km2) is land and 10.6 square miles (27 km2) is water, comprising 18.09% of the town. Wolfeboro is drained by the Smith River, which is the outlet of Lake Wentworth and an inlet of Lake Winnipesaukee. The highest point in town is Moody Mountain, elevation 1,420 feet (430 m) above sea level, located near the northern boundary.

Wolfeboro is home to Wentworth State Park, a 50-acre (0.20 km2) state park on the shore of Lake Wentworth. 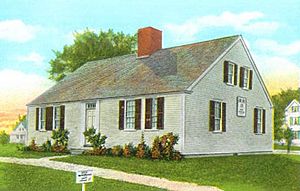 Wolfeboro is served by Kingswood Regional High School, located on Main Street southeast of the center of town. Adjoining the high school is Kingswood Regional Middle School. The two elementary schools located in the community are Carpenter and Crescent Lake. All of the aforementioned schools are part of the Governor Wentworth Regional School District, which includes five additional towns. The town is also home to Brewster Academy, a private preparatory school.

All content from Kiddle encyclopedia articles (including the article images and facts) can be freely used under Attribution-ShareAlike license, unless stated otherwise. Cite this article:
Wolfeboro, New Hampshire Facts for Kids. Kiddle Encyclopedia.