Tuftonboro is a town in Carroll County, New Hampshire, United States. The population was 2,467 at the 2020 census. Bounded on the southwest by Lake Winnipesaukee, Tuftonboro includes the villages of Tuftonboro Corner, Center Tuftonboro, Melvin Village and Mirror Lake. 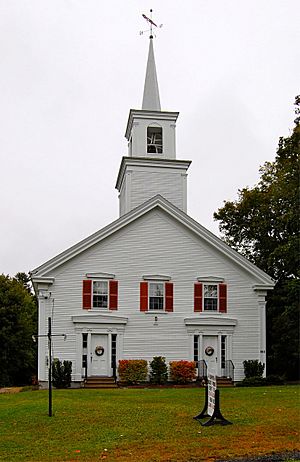 The United Methodist Church in Tuftonboro

Tuftonboro was the only incorporated place in New Hampshire owned by just one man, John Tufton Mason, for whom the town was named. Following the 1741 separation of New Hampshire from Massachusetts, Mason was heir to the Masonian Claim, the undivided lands of northern New Hampshire. He sold them in 1746 to a group of Portsmouth merchants, thereafter known as the Masonian Proprietors. They disposed of the land via grants to prospective settlers prior to the Revolution.

The town was granted as Tuftonborough in 1750 by Colonial Governor Benning Wentworth, and first settled about 1780. It was incorporated by the legislature on December 17, 1795. By 1859, when the population was 1,305, the principal occupation was raising cattle and sheep across the hilly terrain. Other industries included 2 sawmills, one sash, blind and door factory, one carriage factory, and 2 gristmills.

According to the United States Census Bureau, the town has a total area of 50.0 square miles (129 km2), of which 41.0 square miles (106 km2) is land and 9.0 square miles (23 km2) is water, comprising 18.07% of the town. Tuftonboro is drained by the Melvin River and Beech River. Mirror Lake is in the south, and Dan Hole Pond is in the north. The highest point in Tuftonboro is the south peak of Mount Shaw, elevation 2,930 feet (890 m) above sea level, on the town's northwest boundary.

Tuftonboro has miles of winding back roads, rolling fields, old homesteads and beautiful scenic views of the Ossipee Mountains to the northeast. New Hampshire routes 171, 109, and 109A cross the town, all generally in a northwest to southeast direction.

Melvin Village, a village of Tuftonboro, is a summer vacation spot on Melvin Bay of Lake Winnipesaukee. It has a marina and many lakeside homes and cottages that are for rent. It is also a popular spot for antique shopping. Melvin Village is in the western part of Tuftonboro, near the town of Moultonborough.

Also part of Tuftonboro are several islands in Lake Winnipesaukee including Little Bear Island and Cow Island among others. 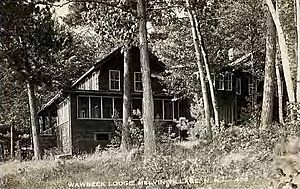 All content from Kiddle encyclopedia articles (including the article images and facts) can be freely used under Attribution-ShareAlike license, unless stated otherwise. Cite this article:
Tuftonboro, New Hampshire Facts for Kids. Kiddle Encyclopedia.