Ossipee is a town in Carroll County, New Hampshire, United States. The population was 4,372 at the 2020 census. It is the county seat of Carroll County. Ossipee, which includes several villages, is a resort area and home to part of Pine River State Forest. 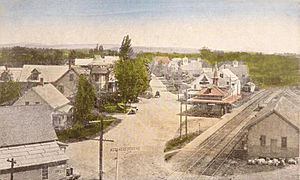 Originally known as Wigwam Village, and then New Garden, the town was named for the Ossipee Indians, one of the twelve Algonquian tribes. It was once the site of an Indian stockade fort, designed to protect the tribe from the Mohawks in the west. In 1725, the Indian stockade was destroyed, and then rebuilt by Captain John Lovewell. The new fort was one of the largest in New England. The fort was located where the second green of Indian Mound Golf now is. Wood, ramrods and the brass bolt used for the gate were discovered when the course was built. On February 22, 1785, the legislature incorporated Ossipee as a town.

Although the surface of the town is "rough and uneven, and in some parts rocky and mountainous," farmers found it suitable for pasturage, as well as for cultivating wheat and potatoes. Principal goods were produce, lumber and cattle. In 1859, when the population was 2,123, Ossipee contained twelve sawmills, five gristmills, twelve clapboard and shingle mills, one bedstead factory, one door factory, a sash and blind factory, one paper mill and four tanneries. The Portsmouth, Great Falls & Conway Railroad in 1871 reached Ossipee Corner, with service extended in 1875 to Center Ossipee. The trains brought commerce and tourists, helping the town develop as a summer resort. Railroad service, however, would be discontinued in 1961 for passengers, and in 1972 for freight.

The town shares its name with the Ossipee Mountains, a circular mountain range marking the location of an ancient volcanic ring dike, which borders it on the west. Ossipee is a major source of sand and gravel, transported by railroad to Boston, Massachusetts.

Ossipee claims to be the home of the first snowmobile. In 1917, Virgil D. White set up to create a patent for his conversion kit that changed the Ford Model T into a "snowmobile". He also copyrighted the term "snowmobile". At the time, the conversion kit was expensive, costing about $395. Virgil White applied his patent in 1918 and created his own snowmobile. In 1922, his conversion kit was on the markets and available only through Ford dealerships. The welcome sign for the town that states "Home of the First Snowmobile" was put up in late 2010.

The town is crossed by state routes 16, 25, 28 and 171. It borders the towns of Freedom and Effingham to the northeast, Wakefield to the southeast, Wolfeboro, Tuftonboro and Moultonborough to the southwest, Tamworth to the northwest and Madison to the north. 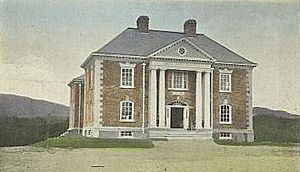 The Carroll County Courthouse in 1921. Built in 1916, it is now the Ossipee Historical Society Museum. 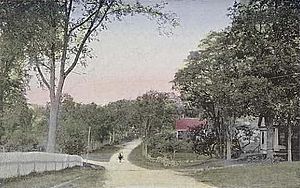 All content from Kiddle encyclopedia articles (including the article images and facts) can be freely used under Attribution-ShareAlike license, unless stated otherwise. Cite this article:
Ossipee, New Hampshire Facts for Kids. Kiddle Encyclopedia.