Moultonborough is a town in Carroll County, New Hampshire, United States. The population was 4,918 at the 2020 census, up from 4,044 at the 2010 census. Moultonborough is bounded in large part by Lake Winnipesaukee in the southwest and to a lesser extent by Squam Lake in the northwest corner. The town includes the census-designated place of Suissevale and the community of Lees Mill. 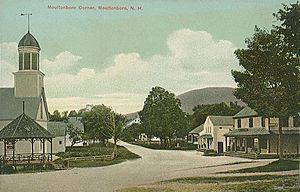 The first settlers were grantees from Hampton, among whom were at least sixteen Moultons, giving the town its name. Colonel Jonathan Moulton was considered to be one of the richest men in the province at the start of the American Revolution. Moultonborough was chartered in 1763 by Colonial Governor Benning Wentworth, and at the time was described as being near the "Winnepisseoky Pond." It was officially incorporated in 1777.

Moultonborough is home to the "Castle in the Clouds", an estate set in the Ossipee Mountains. Thomas Gustave Plant made a fortune manufacturing shoes, bought 6,300 acres (25 km2) and hired the Boston architectural firm of J. Williams Beal & Sons to design "Lucknow," a stone mansion built between 1913 and 1914. The property, with sweeping views of Lake Winnipesaukee, is a popular tourist attraction.

The town center of Moultonborough is located 1 mile (1.6 km) north of the head of Moultonborough Bay, at the intersection of New Hampshire Route 25 and Route 109. Route 25 is a major east-west highway in the state connecting Meredith and Plymouth to the west with Ossipee, New Hampshire and Portland, Maine to the east. Route 109, a local road, proceeds southeast towards Wolfeboro and northwest to Center Sandwich.

The racial makeup of the town was:

All content from Kiddle encyclopedia articles (including the article images and facts) can be freely used under Attribution-ShareAlike license, unless stated otherwise. Cite this article:
Moultonborough, New Hampshire Facts for Kids. Kiddle Encyclopedia.