Plymouth is a town in Grafton County, New Hampshire, United States, in the White Mountains Region. Plymouth is located at the convergence of the Pemigewasset and Baker rivers. The population was 6,990 at the 2010 census. The town is home to Plymouth State University, Speare Memorial Hospital, and Plymouth Regional High School.

The town's central settlement, where 4,456 people resided at the 2010 census (three-quarters of whom are college student age), is defined as the Plymouth census-designated place (CDP), and is located along U.S. Route 3, south of the confluence of the Baker and Pemigewasset rivers.

Plymouth was originally the site of an Abenaki village that was burned to the ground by Captain Thomas Baker in 1712. This was just one of the many British raids on American Indian settlements during Queen Anne's War. Part of a large plot of undivided land in the Pemigewasset Valley, the town was first named New Plymouth, after the original Plymouth Colony in Massachusetts. Colonial Governor Benning Wentworth granted Plymouth to settlers from Hollis, all of whom had been soldiers in the French and Indian War. Some had originally come from Plymouth, Massachusetts. The town was incorporated in 1763. Parts of Hebron and Campton were annexed in 1845 and 1860.

In 1806, then-lawyer Daniel Webster lost his first criminal case at the Plymouth courthouse, which now houses the Historical Society. The author Nathaniel Hawthorne, while on vacation in 1864 with former U.S. President Franklin Pierce, died in Plymouth at the second Pemigewasset House, which was later destroyed by fire in 1909. In the early 20th century, the Draper and Maynard Sporting Goods Company (D&M) sold products directly to the Boston Red Sox, and players such as Babe Ruth would regularly visit to pick out their equipment. The Plymouth Normal School was founded in 1871 out of the already existing Holmes Plymouth Academy, becoming the state's first teachers' college. It would later evolve into Plymouth Teachers' College in 1939, Plymouth State College in 1963, and finally Plymouth State University in 2003. 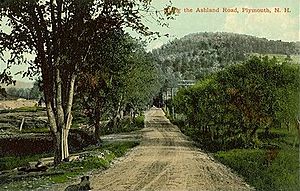 According to the United States Census Bureau, the town has a total area of 28.7 square miles (74.3 km2), of which

28.1 square miles (72.8 km2) is land and 0.6 square miles (1.6 km2) of it is water, comprising 2.00% of the town. Plymouth is drained by the Pemigewasset and Baker rivers and lies within the Merrimack River watershed. Plymouth Mountain, elevation 2,193 feet (668 m) above sea level, the highest point in Plymouth, is in the south, and the slopes of Tenney Mountain are in the west. (The 2,310-foot (700 m) summit of Tenney Mountain lies in the town of Groton.)

There were 1,953 households, out of which 24.1% had children under the age of 18 living with them, 37.1% were headed by married couples living together, 8.6% had a female householder whose husband did not live with her, and 50.1% were non-families. 28.6% of all households were made up of individuals, and 9.9% were someone living alone who was 65 years of age or older. The average household size was 2.41, and the average family size was 2.89. 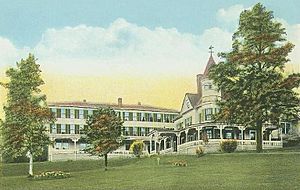 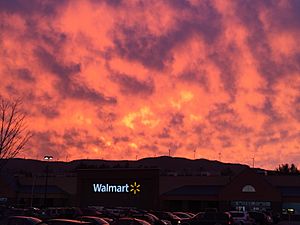 All content from Kiddle encyclopedia articles (including the article images and facts) can be freely used under Attribution-ShareAlike license, unless stated otherwise. Cite this article:
Plymouth, New Hampshire Facts for Kids. Kiddle Encyclopedia.