The Pemigewasset River known locally as "The Pemi", is a river in the state of New Hampshire, the United States. It is 65.0 miles (104.6 km) in length and (with its tributaries) drains approximately 1,021 square miles (2,644 km2). The name "Pemigewasset" comes from the Abenaki word bemijijoasek [bəmidzidzoasək], meaning "where side (entering) current is".

The Pemigewasset originates at Profile Lake in Franconia Notch State Park, in the town of Franconia. It flows south through the White Mountains and merges with the Winnipesaukee River to form the Merrimack River at Franklin. The Merrimack then flows through southern New Hampshire, northeastern Massachusetts and into the Atlantic Ocean. 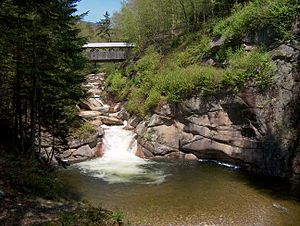 The Sentinel Pine bridge and The Pool in Franconia Notch

The river descends over waterfalls in Franconia Notch, including "The Basin", passes cascades in North Woodstock, and drops over Livermore Falls north of Plymouth. The remainder of the northern Pemi, from Lincoln to Ashland, passes over copious gravel bars and attracts numerous boaters and fishermen. Below Ashland, the river is impounded by the Ayers Island Dam, a hydroelectric facility, for over five miles. A short stretch of heavy whitewater is found below the dam, before the river reaches the impoundment zone for the Franklin Falls flood control reservoir. The river crosses one additional hydroelectric dam below Franklin Falls before joining the Winnipesaukee River in the center of Franklin.

The Pemigewasset watershed consists of over 1,100 miles (1,800 km) of rivers and 17,000 acres (69 km2) of lake, pond, and reservoir area. The watershed comprises about 20 percent of the Merrimack's total watershed area. 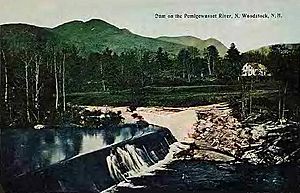 Dam on the Pemigewasset River in 1912, Woodstock, NH

Major tributaries include (from north to south):

All content from Kiddle encyclopedia articles (including the article images and facts) can be freely used under Attribution-ShareAlike license, unless stated otherwise. Cite this article:
Pemigewasset River Facts for Kids. Kiddle Encyclopedia.