Woodstock is a town in Grafton County, New Hampshire, United States. The population was 1,434 at the 2020 census. Woodstock includes the village of North Woodstock, the commercial center. Its extensive land area is largely forested, and includes the Hubbard Brook Experimental Forest. Parts of the White Mountain National Forest are in the east and west. The Appalachian Trail crosses the town's northwest corner. Russell Pond Campground is in the east. West of North Woodstock is the Lost River Reservation.

First granted in 1763, Colonial Governor Benning Wentworth named the town Peeling after an English town. Many of the first colonists were originally from Lebanon, Connecticut. In 1771, his nephew, Governor John Wentworth, gave it the name Fairfield, after Fairfield, Connecticut. The town was renamed Woodstock in 1840 for Blenheim Palace in Woodstock, England.

Logging became a principal early industry, with sawmills established using water power from the Pemigewasset River. The entrance of the railroad in the 19th century opened the wilderness to development, carrying away wood products to market. It also brought tourists, many attracted by paintings of the White Mountains by White Mountain artists. Several inns and hotels were built to accommodate the wealthy, who sought relief from the summer heat, humidity and pollution of coal-age Boston, Hartford, New York and Philadelphia. They often relaxed by taking carriage rides through the White Mountains, or by hiking along the Lost River in Lost River Reservation. But with the advent of automobiles, patrons were no longer restricted by the limits of rail service. Consequently, many grand hotels established near depots declined and closed. Woodstock, however, remains a popular tourist destination.

The Hubbard Brook Experimental Forest, an outdoor laboratory for ecological studies founded by the United States Forest Service in 1955, is located in the southern part of town. 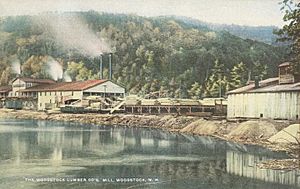 Of the 624 households, 25.5% had children under the age of 18 living with them, 43.6% were headed by married couples living together, 8.5% had a female householder with no husband present, and 43.4% were non-families. 31.6% of all households were made up of individuals, and 9.2% were someone living alone who was 65 years of age or older. The average household size was 2.20, and the average family size was 2.77.

All content from Kiddle encyclopedia articles (including the article images and facts) can be freely used under Attribution-ShareAlike license, unless stated otherwise. Cite this article:
Woodstock, New Hampshire Facts for Kids. Kiddle Encyclopedia.