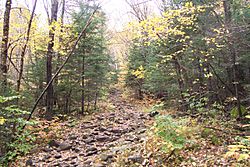 Moosilauke is ranked 9th on the New England Fifty Finest peaks, a list of summits with the highest topographic prominence. The Appalachian Trail passes over the mountain. It is sometimes referred to as the "Gentle Giant".

The name Moosilauke (with its many variant spellings) is derived from the Abenaki language. The most common translation is "bald place". However, the derivation of place names from Algonquian languages is often quite uncertain, and other possible translations of Moosilauke include "at the place of ferns", "at the smooth place on the summit" and "good moose place along the brook".

Mount Moosilauke is made up of metamorphic rock called the Littleton Formation which is Lower Devonian in age. The Littleton Formation is primarily a mica schist with zones containing garnet and staurolite-sillimanite. The unit also contains interbedded amphibolites. The mica schist started out as clay-rich mud in a marine basin that probably formed during the early Acadian Orogeny. The amphibolites may represent metamorphosed submarine basalt flows.

Pegmatite dikes cross-cut the Littleton Formation and can be seen from the Gorge Brook Trail as it nears treeline. These pegmatites are likely related to the geology to the east of the mountain which is dominated by the Kinsman quartz monzonite. This Acadian-aged igneous rock can be seen at the Kinsman Notch / Beaver Brook pond area.

The summit of Moosilauke is treeless and offers panoramic views of the Kinsmans to the north, the Presidential Range and Franconia Ridge to the northeast, the heart of the White Mountains to the east, Lake Winnipesaukee and neighboring lakes to the southeast, and the Green Mountains and Adirondacks to the west, along with great views closer in to numerous glacially-carved ravines on Moosilauke's shoulders. The first winter high country weather observatory was set up at the top of Mt. Moosilauke in the winter of 1869-1870.

Moosilauke has numerous subsidiary peaks, including Mount Blue, elevation 4,529 feet (1,380 m), to the north of the summit, and the South Peak, elevation 4,523 feet (1,379 m), between the Carriage Road and Glencliff Trail, about one mile southwest of the main peak. The South Peak, reached by a 0.2-mile (0.32 km) spur trail, is particularly noted for its fine views of the main summit ridge, into the deep Tunnel Brook Ravine to neighboring Mt. Clough and westward into the Connecticut River valley and Vermont beyond.

The Moosilauke Ravine Lodge, which offers food and accommodations to hikers, is situated in the valley on the southeast side of the mountain. The lodge is owned by Dartmouth College and is run by members of the Dartmouth Outing Club. Dartmouth College owns much of the southern and eastern portions of the mountain and has long had a close association with it, with the Outing Club maintaining its trails and the Appalachian Trail from Kinsman Notch southward to Hanover. Due to this long association, Moosilauke is often called "Dartmouth's Mountain".

All content from Kiddle encyclopedia articles (including the article images and facts) can be freely used under Attribution-ShareAlike license, unless stated otherwise. Cite this article:
Mount Moosilauke Facts for Kids. Kiddle Encyclopedia.