Kids Encyclopedia Facts
For the range of the same name in the Green Mountains of Vermont, see Presidential Range (Green Mountains). 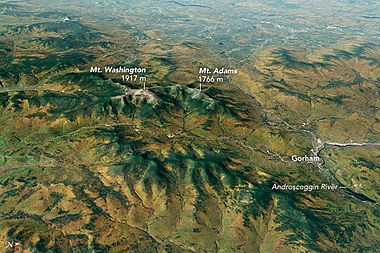 Computer-generated image from satellite data of the Presidential Range and vicinity on a rare clear day, 2014

The Presidential Range is a mountain range located in the White Mountains of the U.S. state of New Hampshire. Containing the highest peaks of the Whites, its most notable summits are named for American presidents, followed by prominent public figures of the 18th and 19th centuries. The Presidential Range is notorious for having some of the worst weather on Earth, mainly because of the unpredictability of high wind speeds and whiteout conditions on the higher summits. Because of the poor weather conditions, the Presidential Range is often used for mountaineering training for those who go on to climb some of the world's highest mountains, including K2 and Everest.

The highest mountains in the Presidential Range are named principally for U.S. presidents, with the tallest mountain (Mount Washington) named for the first president, the second tallest (Mount Adams) for the second president, and so on. However, due to a surveying error, Mount Monroe is actually 22 feet (6.7 m) taller than Mount Madison, which is not the correct order of presidents.

Among the range's most notable summits (in sequence from southwest to northeast):

Mount Adams has four subsidiary peaks besides its summit that are also commonly recognized by name. Two are listed above (Sam Adams and John Quincy Adams). The third and fourth are:

The summits marked with an asterisk (*) are included on the peak bagging list of 4,000-foot and higher mountains in New Hampshire; the others are excluded, in some cases because of lesser height and in others because of more technical criteria. 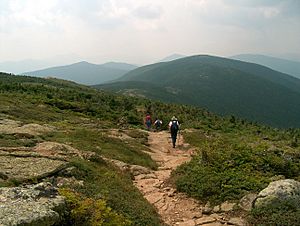 The Appalachian Trail in the southern Presidential Range

Aside from the notable summits, the Presidential Range contains a number of additional named peaks. Several of these peaks, drained on their west faces by the Dry River, are less accessible than the main and most-visited ridge of the range.

The summits marked with an asterisk (*) are included on the peak-bagging list of 4,000-foot and higher mountains in New Hampshire; the others are excluded, in some cases because of lesser height and in others because of more technical criteria.

The Presidentials separate drainage via the Saco and Androscoggin rivers into the Atlantic Ocean on the coast of Maine, from drainage into the Israel and Ammonoosuc rivers, thence into the Connecticut River, and thence into Long Island Sound.

The so-called Presidential Traverse is a hike that traverses each major summit along the 19 miles (31 km) of the Presidential ridge. The traverse encompasses over 8,500 feet (2,600 m) in elevation gain. It can be done in a single day in summer, but during winter it is generally a two- to four-day venture. The traverse is considered strenuous. 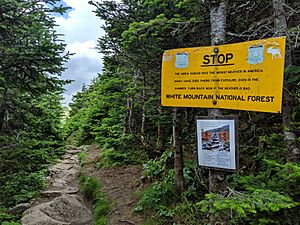 The range is notorious for its unpredictable and inclement weather, with some of the deadliest mountains in the continental United States. Due to its unique location relative to other geographic features, it holds the world record for highest recorded surface wind speed not within a tropical cyclone. Fatalities in this area are dominated by those that occur on Mount Washington, the highest peak in the range. The New Hampshire Fish and Game Department conducts an average of 200 rescues a year for hikers in need of assistance.

All content from Kiddle encyclopedia articles (including the article images and facts) can be freely used under Attribution-ShareAlike license, unless stated otherwise. Cite this article:
Presidential Range Facts for Kids. Kiddle Encyclopedia.