Pinkham Notch (elevation 2032 ft. / 619 m) is a mountain pass in the White Mountains of north-central New Hampshire, United States. The notch is a result of extensive erosion by the Laurentide Ice Sheet during the Wisconsinian ice age. Pinkham Notch was eroded into a glacial U-shaped valley whose walls are formed by the Presidential, Wildcat, and Carter-Moriah ranges. Due to the volatility of the area's climate and rugged character of the terrain, a number of rare or endemic ecosystems have developed throughout the notch.

The notch was discovered in 1784 by Jeremy Belknap, but its isolation prevented further development for several years. The construction of New Hampshire Route 16 has led to increased accessibility and a rise in tourism. Its location makes it a hub for hiking and skiing. 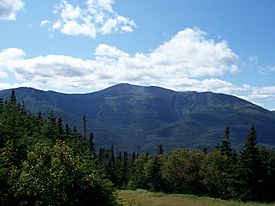 Mount Washington, which forms the western wall of Pinkham Notch, holds several glacial cirques. From left to right are Tuckerman Ravine, the Ravine of Raymond Cataract, and Huntington Ravine.

The bulk of the western slope of the notch is formed by Mount Washington, the highest peak in the northeast United States, reaching 6,288 feet (1,917 m) above sea level. Mount Washington rises more than 4,000 feet (1,200 m) above the floor of the notch. A number of glacial cirques are found on this side of the notch. The Great Gulf and its tributary cirques form the largest cirque in the White Mountains. South of the Great Gulf is Huntington Ravine, with a rocky, precipitous headwall renowned for its rock and ice climbing. The slope then dips into the Ravine of Raymond Cataract, a non-glacial "V-shaped" valley with a notable waterfall. After this comes Tuckerman Ravine, with a uniform, smoother headwall that is known for its high-quality skiing. After passing the Gulf of Slides, a smaller and lesser-known cirque, the notch opens up and continues until Jackson.

The eastern slope of the notch consists of the Wildcat and Carter-Moriah Ranges, slightly lower than the Presidential Range to the west. The Wildcat Range consists of five peaks, named A, B, C, D, and E from northeast to southwest in order of height. Wildcat A is the highest, at 4,422 feet (1,348 m). From the main ridge, the slopes drop very steeply, but not precipitously, to the floor of the notch. The Wildcat Mountain Ski Area occupies the western slopes of Wildcat up to the col between D and E peaks. As the notch rounds E peak, the slope becomes extremely steep, and Wildcat Ridge begins to drop to the end of the notch.

Pinkham Notch was originally a riverine, "V-shaped" valley until the Laurentide Ice Sheet shaped it into its current form, a "U-shaped" valley. This shaping occurred during the Wisconsinian Ice Age, 25–50,000 years ago. The geology of the region became greatly altered by this event; much of the weaker rock was stripped from the region, leaving only highly-resistant mica schist. As the glaciers retreated, a layer of glacial till was deposited, including several glacial erratics. A notable glacial erratic in the area is Mount Washington's Glen Boulder. 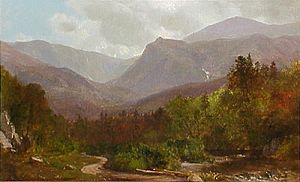 The notch first appears in recorded history in 1784, when an expedition led by Jeremy Belknap camped in the notch before ascending to the summit of Mount Washington through Huntington Ravine. Pinkham Notch was far more isolated than neighboring Crawford Notch; as a result, the first settler of Pinkham Notch came in 1827, 43 years after habitation of Crawford Notch. The first settler, Hayes Copp, built a homestead in the then-uninhabited area, near where the Dolly Copp campground stands today. Copp and his wife lived alone in the wilderness until Daniel Pinkham completed the first road through the notch between in 1836, finally providing a link between the Copp homestead and civilization. In 1851, a railroad was built to Gorham, and a hotel, the Glen House, was constructed to accommodate passengers. Mount Washington was the main attraction in the area; a bridle path was constructed from the Glen House to hotels on the summit, which was later improved into what would become the Mount Washington Auto Road. Completion of the road in 1861 led to a massive increase in tourism.

Meanwhile, logging began in the Pinkham area. After almost total deforestation of the White Mountain region, the White Mountain National Forest was created in 1911, and the Mount Washington area was added to the national forest in 1914. With the preservation of the area, emphasis shifted from logging to recreation. The Appalachian Mountain Club converted a logging camp near the height-of-land into what is now the Pinkham Notch Visitor Center in 1921. The Appalachian Trail was built through the visitor center, making it an important trailhead for ascents of Mount Washington. Meanwhile, ski trails began to be constructed by the Civilian Conservation Corps on Wildcat Mountain, and the ski resort was opened in 1958. 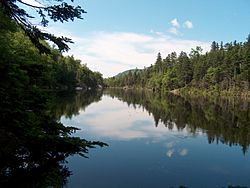 Mount Washington is a common objective, and is often climbed from Pinkham Notch. There are numerous trail approaches from the Appalachian Mountain Club's visitor's center. Although trail distances seem short, the trip to the summit should not be underestimated; most trail approaches involve at least 4,000 vertical feet (1,200 m) of climbing, including an ascent of the rocky summit cone and the boulder-strewn upper slopes. Weather changes very quickly, and one must be prepared for extreme conditions. The Tuckerman Ravine Trail is the most popular trail in the notch, ascending to the summit via the headwall of Tuckerman Ravine. The Huntington Ravine Trail is widely considered the most difficult trail in New Hampshire, making its way up the precipitous headwall of neighboring Huntington Ravine, where there are several rock climbing opportunities.

On the other side of the notch, the Wildcat Range is a popular objective. The five summits can be reached via the Wildcat Ridge Trail; the first two miles are extremely difficult, and require skill on short, yet exposed, rock scrambles. This part of the trail is frequently bypassed by following the ski area's Polecat Trail to the summit of D Peak.

The Appalachian Trail, which extends over 2,150 miles (3,460 km) from Georgia to Maine, runs along the Presidential Range before crossing the notch and ascending to the summits of the Wildcat Range.

There are also less challenging hikes that are equally scenic, yet better suited for families with young children. Popular objectives include Glen Ellis Falls, a waterfall on the Ellis River, and Square Ledge, with an impressive view of Mount Washington for modest effort. 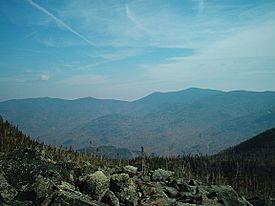 The Wildcat Range, as seen from Tuckerman Ravine, forms the eastern slope of Pinkham Notch. A ski area operates on the range's northwestern face.

The area also has many opportunities for both alpine and Nordic skiing. The bowl of Tuckerman Ravine is famous for its extremely steep backcountry skiing. Long lines are common during the peak spring-skiing season of April and May. Wildcat Mountain offers groomed ski trails and lifts, and is a better choice for less-experienced skiers. The centerpiece of the ski-area is the gondola, which runs during the summer, and offers views of the Presidentials with no expended effort.

For Nordic skiing, Great Glen Trails offers a large, groomed trail system that also includes the lower half of the Auto Road. Several warming huts are scattered around the trail system, including scenic Great Angel Cabin, with views of the Great Gulf and surrounding peaks. Great Glen also permits biking on the trails during the summer, and is the only mountain bike facility in the notch. Another cross-country trail system exists in the town of Jackson, extending as far as the summit of Wildcat Mountain.

All content from Kiddle encyclopedia articles (including the article images and facts) can be freely used under Attribution-ShareAlike license, unless stated otherwise. Cite this article:
Pinkham Notch Facts for Kids. Kiddle Encyclopedia.