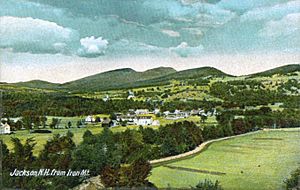 Once consisting of several large land grants by Colonial Governor John Wentworth, the town was first named New Madbury, after the seacoast town of Madbury. In 1772, a road was built through Pinkham Notch, and the area was first settled in 1778 by Benjamin Copp and his family. In 1800, the community was renamed in honor of President John Adams, who was then in office. The name Adams stuck until the town was incorporated in 1829, when Andrew Jackson, the hero of the Battle of New Orleans, was inaugurated president. Governor Benjamin Pierce, a staunch backer of President Jackson, was influential in changing the name to Jackson. Only one vote was cast against the switch.

In 1847, artists of the White Mountain School began arriving in Jackson to paint the scenic beauty of the White Mountains. Others would follow, and in 1858, Joshua B. Trickey opened the Jackson Falls House. The Portland & Ogdensburg Railroad began service to Glen station at nearby Bartlett in the early 1870s, and several hotels were built to accommodate a growing infusion of tourists. Thorn Mountain House, built by Trickey in 1869, would evolve during the 1880s into Wentworth Hall, still in business today. Designed as a grouping of cottages around a main service building, the hotel included such amenities as a casino, built in 1886, and a hydroelectric plant, built in the 1890s. By the 1920s, 40 trains a day delivered passengers to Jackson.

The increasing use of automobiles, however, reduced travel by train, as vacationers could venture beyond the limits of rail service. Consequently, some grand 19th century hotels lost patrons and closed, although the town itself would never lose popularity. Jackson is one of the region's most picturesque villages, famous in part for Jackson Falls and Jackson X-C, a 150+ kilometer cross-country skiing trail system, rated one of the best in the world. Wildcat Mountain, with an unsurpassed view of Mount Washington, is a favorite alpine skiing destination. Jackson is perhaps best known for its red covered bridge (the Honeymoon Bridge), built in 1876, one of the most photographed in the state.

According to the United States Census Bureau, the town has a total area of 66.9 square miles (173 km2), of which 0.01% is water. Jackson is drained by the Ellis River and Wildcat Brook. The highest point in Jackson is 3,870 feet (1,180 m) above sea level on Wildcat Ridge, at the northern boundary of town. The ridge continues to rise north of town to the summit of Wildcat Mountain—4,422 ft (1,348 m)—in the neighboring township of Bean's Purchase. Jackson lies fully within the Saco River watershed. 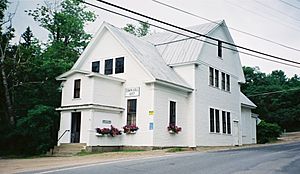 There were 377 households, out of which 21.0% had children under the age of 18 living with them, 57.8% were married couples living together, 5.0% had a female householder with no husband present, and 36.1% were non-families. 27.1% of all households were made up of individuals, and 10.3% had someone living alone who was 65 years of age or older. The average household size was 2.18 and the average family size was 2.67. 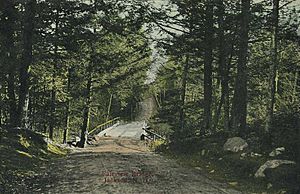 All content from Kiddle encyclopedia articles (including the article images and facts) can be freely used under Attribution-ShareAlike license, unless stated otherwise. Cite this article:
Jackson, New Hampshire Facts for Kids. Kiddle Encyclopedia.