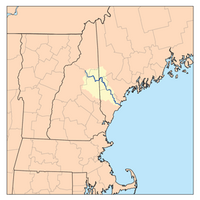 The Saco River is a river in northeastern New Hampshire and southwestern Maine in the United States. It drains a rural area of 1,703 square miles (4,410 km2) of forests and farmlands west and southwest of Portland, emptying into the Atlantic Ocean at Saco Bay, 136 miles (219 km) from its source. It supplies drinking water to roughly 250,000 people in thirty-five towns; and historically provided transportation and water power encouraging development of the cities of Biddeford and Saco and the towns of Fryeburg and Hiram. The name "Saco" comes from the Eastern Abenaki word [sɑkohki], meaning "land where the river comes out". The Jesuit Relations, ethnographic documents from the 17th century, refer to the river as Chouacoet.

The river rises at Saco Lake in Crawford Notch in the White Mountains and flows generally south-southeast through Bartlett and Conway in Carroll County, New Hampshire before crossing into Oxford County, Maine.

Shortly after entering Fryeburg, Maine, the river branches into the "Old Course" Saco River and the more commonly used "Canal River". Constructed in the 1800s to be more convenient for farmers, the 6-mile (10 km) long canal is 15 miles (24 km) shorter than the old course and is now considered to be the official course for the river, as the upstream end of the old course is largely silted over. The two channels merge again near Lovell, Maine.

After running through six hydropower stations operated by NextEra Energy Resources (including Skelton Dam and Bonny Eagle Dam), the river enters York County, crosses under Interstate 95, and passes between Saco and Biddeford, where it is bridged by U.S. Route 1. It enters Saco Bay on the Atlantic with Camp Ellis in Saco on the north shore and Hills Beach in Biddeford on the south shore. 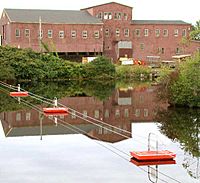 The Saco River at Saco, Maine, seen from the bridge over U.S. Route 1

The Saco is a popular recreational river, drawing an estimated 3,000 to 7,000 people per summer weekend, mostly on the stretch from Swan's Falls (a campground formerly maintained by the Appalachian Mountain Club and now maintained by the Saco River Recreation Council), to Brownfield, Maine.

There are many sand beaches along the Saco when not at flood stage and camping is allowed along some of these beaches for free. Misuse, including large quantities of garbage left behind by users and illegal fires, as well as discourtesy toward landowners, has led many beaches to be posted and monitored. A permit is required from the State of Maine for campfires along any unposted river beaches.

The Saco is a major attraction for canoeists. One area of the river, Walker's Rip, is a set of rapids that has caused less talented canoers to capsize, although it can be navigated successfully. Several canoeing rentals are available throughout the river's distance.

The Saco river is also famous for sport fishing, even though the number of fish in it has decreased tremendously throughout time.

Local legends have held that the river is subject to the Saco Curse of Squandro. 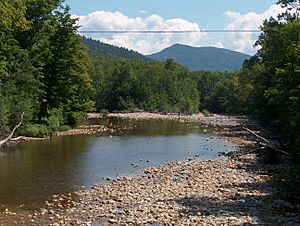 The Saco River in Crawford Notch 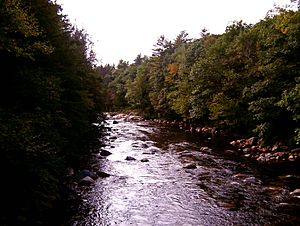 The Saco River from the Covered Bridge Gift Shoppe

Listed from source to mouth:

All content from Kiddle encyclopedia articles (including the article images and facts) can be freely used under Attribution-ShareAlike license, unless stated otherwise. Cite this article:
Saco River Facts for Kids. Kiddle Encyclopedia.