Saco is a city in York County, Maine, United States. The population was 18,482 at the 2010 census. It is home to Ferry Beach State Park, Funtown Splashtown USA, Thornton Academy, as well as General Dynamics Armament Systems (also known by its former name, Saco Defense), a subsidiary of the defense contractor General Dynamics. Saco sees much tourism during summer months, due to its amusement parks, Ferry Beach State Park, and proximity to Old Orchard Beach.

This was territory of the Abenaki tribe whose fortified village was located up the Sokokis Trail at Pequawket (now Fryeburg).In July 1607, 500 wariors lead by sakmow (Grand Chief) of the Mi'kmaq First Nations Henri Membertou was revenge for murder and similar acts of hostility. The group raided on the Armouchiquois town, Chouacoet, present-day Saco, killing 20 of their braves, including two of their leaders, Onmechin and Marchin.

The township was granted in 1630 by the Plymouth Company to Thomas Lewis and Richard Bonython, and extended 4 miles (6.4 km) along the sea, by 8 miles (13 km) inland. Settled in 1631 as part of Winter Harbor (as Biddeford Pool was first known), it then included Biddeford. It would be reorganized in 1653 by the Massachusetts General Court as Saco.

The settlement was attacked by Indians in 1675 during King Philip's War. Settlers moved to the mouth of the river, and the houses and mills they left behind were burned. Saco lay in contested territory between New England and New France, which recruited the Indians as allies. In 1689 during King William's War, it was again attacked, with some residents taken captive. Hostilities intensified from 1702 until 1709, then ceased in 1713 with the Treaty of Portsmouth. The community was rebuilt and in 1718 incorporated as Biddeford. Peace would not last, however, and the town was again attacked in 1723 during Dummer's War, when it contained 14 garrisons. In August and September 1723, there were Indian raids on Saco, Maine and Dover, New Hampshire. But in 1724, a Massachusetts militia destroyed Norridgewock, an Abenaki stronghold on the Kennebec River organizing raids on English settlements. The region became less dangerous, especially after the French defeat in 1745 at the Battle of Louisburg. The French and Indian Wars finally ended with the 1763 Treaty of Paris.

In 1762, the northeastern bank of Biddeford separated as Pepperrellborough, named for Sir William Pepperrell, hero of the Battle of Louisburg and late proprietor of the town. Amos Chase was one of the pioneers of Pepperrellborough. He was chosen as a selectman at the first town meeting, and served as the first deacon of the Congregational Church. Dea. Chase was one of the area's largest taxpayers, and was prominent in civic affairs during the American Revolution, serving on the town's Committee of Correspondence and Committee of Inspection.

Inhabitants found the name Pepperrellborough to be cumbersome, so in 1805 it was renamed Saco. It would be incorporated as a city in 1867. Saco became a center for lumbering, with log drives down the river from Little Falls Plantation (now Dayton, Lyman, Hollis and part of Limington). At Saco Falls, the timber was cut by 17 sawmills. In 1827, the community produced 21,000,000 feet (6,400,000 m) of sawn lumber, some of which was used for shipbuilding.

On Factory Island, the Saco Iron Works began operation in 1811. The Saco Manufacturing Company established a cotton mill in 1826, and a canal was dug through rock to provide water power. The mill burned in 1830, but was replaced in 1831 by the York Manufacturing Company. With the arrival of the Portland, Saco and Portsmouth Railroad in 1842, Factory Island developed into a major textile manufacturing center, with extensive brick mills dominating the Saco and Biddeford waterfronts. Other businesses included foundries, belting and harnessmaking, and machine shops. But the New England textile industry faded in the 20th-century, and the York Manufacturing Company would close in 1958. The prosperous mill town era, however, left behind much fine architecture in the Georgian, Federal, Greek Revival and Victorian styles. Many buildings are now listed on the National Register of Historic Places.

Saco has taken steps to make the city more environmentally friendly. In early 2007 a wind turbine was erected near the water treatment plant at the foot of Front street. Another wind turbine was erected on the top of York Hill in December 2007 to generate power for the new train station for Amtrak's Downeaster. This is part of the project to restore Factory Island, including the renovation of several abandoned mills that have fallen into disrepair, and the erection of new townhouses and a marina. Saco also has two growing business parks and another one under development. 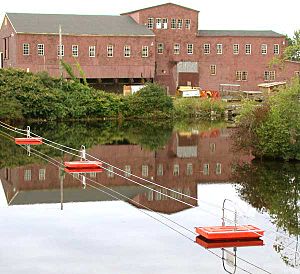 The Saco River at Saco

Saco borders the city of Biddeford, as well as the towns of Scarborough, Buxton, Dayton and Old Orchard Beach.

There were 7,623 households of which 28.5% had children under the age of 18 living with them, 49.2% were married couples living together, 10.7% had a female householder with no husband present, 4.7% had a male householder with no wife present, and 35.4% were non-families. 27.0% of all households were made up of individuals and 10% had someone living alone who was 65 years of age or older. The average household size was 2.38 and the average family size was 2.88.

There were 6,801 households out of which 33.1% had children under the age of 18 living with them, 53.3% were married couples living together, 10.6% had a female householder with no husband present, and 32.5% were non-families. 25.2% of all households were made up of individuals and 10.1% had someone living alone who was 65 years of age or older. The average household size was 2.44 and the average family size was 2.93. 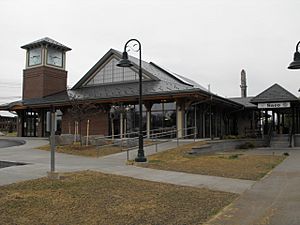 The Saco Transportation Center provides transportation between Portland and Boston via the Downeaster passenger train.

The Portland International Jetport is about 14 miles (23 km) north of Saco. The ShuttleBus and Zoom Bus provide local transportation.

All content from Kiddle encyclopedia articles (including the article images and facts) can be freely used under Attribution-ShareAlike license, unless stated otherwise. Cite this article:
Saco, Maine Facts for Kids. Kiddle Encyclopedia.