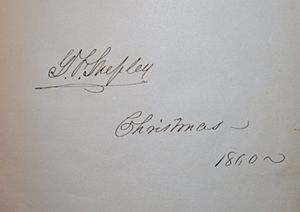 Autograph of General George Foster Shepley from an autograph album he gave to his daughter Anne at Christmas, 1860 (Private Collection of H. Blair Howell) 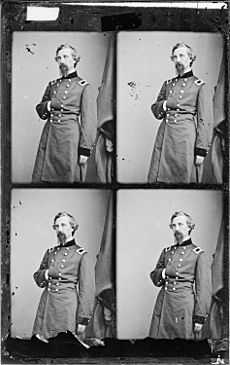 Shepley was nominated by President Ulysses S. Grant on December 8, 1869, to the United States Circuit Courts for the First Circuit, to a new seat authorized by 16 Stat. 44. He was confirmed by the United States Senate on December 22, 1869, and received his commission the same day. His service terminated on July 20, 1878, due to his death in Portland. He was interred at Evergreen Cemetery in Portland. His tombstone has his birth date as January 1, 1819.

All content from Kiddle encyclopedia articles (including the article images and facts) can be freely used under Attribution-ShareAlike license, unless stated otherwise. Cite this article:
George Foster Shepley (judge) Facts for Kids. Kiddle Encyclopedia.