King Philip's War (sometimes called the First Indian War, Metacom's War, Metacomet's War, Pometacomet's Rebellion, or Metacom's Rebellion) was an armed conflict in 1675–78 between Indian inhabitants of New England and New England colonists and their Indian allies. The war is named for Metacomet, the Wampanoag chief who adopted the name Philip because of the friendly relations between his father Massasoit and the Mayflower Pilgrims. The war continued in the most northern reaches of New England until the signing of the Treaty of Casco Bay in April 1678.

Massasoit had maintained a long-standing alliance with the colonists. Metacom (c. 1638–1676) was his younger son, and he became tribal chief in 1662 after Massasoit's death. Metacom, however, did not maintain his father's alliance between the Wampanoags and the colonists. The colonists insisted that the peace agreement in 1671 should include the surrender of Indian guns; then three Wampanoags were hanged for murder in Plymouth Colony in 1675 which increased the tensions.

Colonial militia and Indian raiding parties spread over Massachusetts, Rhode Island, Connecticut, and Maine over the next six months. The Narragansetts remained neutral, but several individual Narragansetts participated in raids of colonial strongholds and militia, so colonial leaders deemed the Narragansetts to be in violation of peace treaties. They assembled the largest colonial army that New England had yet mustered, consisting of 1,000 militia and 150 Indian allies, and Governor Josiah Winslow marshaled them to attack the Narragansetts in November 1675.

They attacked and burned Indian villages throughout Rhode Island territory, culminating with the attack on the Narragansetts' main fort called the Great Swamp Fight. An estimated 150 Narragansetts were killed, many of them women and children, and the Indian coalition was then taken over by Narragansett sachem Canonchet. 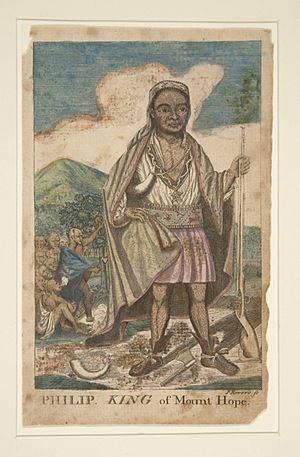 They pushed back the colonial frontier in Massachusetts Bay, Plymouth, and Rhode Island colonies, burning towns as they went, including Providence in March 1676. However, the colonial militia overwhelmed the Indian coalition and, by the end of the war, the Wampanoags and their Narragansett allies were almost completely destroyed. Metacom fled to Mount Hope where he was finally killed by the militia.

The war was the greatest calamity to occur in seventeenth-century New England and is considered by many to be the deadliest war in the history of American colonization. In the space of little more than a year, 12 of the region's towns were destroyed and many more were damaged, the economy of Plymouth and Rhode Island Colonies was all but ruined and their population was destroyed, losing one-tenth of all men available for military service. More than half of New England's towns were attacked by Indians.

King Philip's War began the development of an independent American identity. The New England colonists faced their enemies without support from any outside government or military, and this gave them a group identity separate and distinct from Britain. 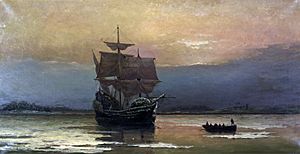 The Pilgrims who arrived on the Mayflower and founded Plymouth Plantation expended great effort forging friendship and peace with the Indians around Cape Cod. They traveled long distances to make peace with Massasoit, chief of the Wampanoag tribe. Yet over the next 50 years, frictions and misunderstandings multiplied as wave after wave of Puritans and non-religious "strangers" (fortune-seekers not motivated by religion) kept arriving, often oblivious to the fragile peace carefully woven since the earliest arrivals. By 1675, the early efforts at friendship failed.

King Philip's War joined a list of uprisings and conflicts between various Indian tribes and the French, Dutch, and English colonial settlements of Canada, New York, and New England. 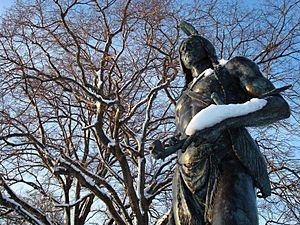 Throughout the Northeast, the Indians had suffered severe population losses as a result of epidemics of smallpox, spotted fever, typhoid, and measles starting in about 1618, two years before the Pilgrims established Plymouth Colony. Plymouth Colony was established in 1620 with significant early help from local Indians, particularly Squanto and Massasoit.

Subsequent colonists were founded and the colonists progressively expanded throughout the territories of the several Algonquian-speaking tribes in the region. Prior to King Philip's War, tensions fluctuated between Indian tribes and the colonists, but relations were generally peaceful.

All content from Kiddle encyclopedia articles (including the article images and facts) can be freely used under Attribution-ShareAlike license, unless stated otherwise. Cite this article:
King Philip's War Facts for Kids. Kiddle Encyclopedia.