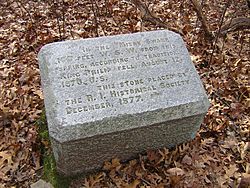 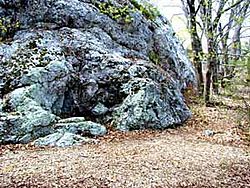 Mount Hope (originally Montaup in Pokanoket language) is a small hill in Bristol, Rhode Island overlooking the part of Narragansett Bay known as Mount Hope Bay. The 7000 acres that now make up the Town of Bristol in Rhode Island were called the Mt. Hope Lands. The elevation of Mt. Hope summit is 209 feet, and drops sharply to the bay on its eastern side. Mount Hope was the site of a Wampanoag (Pokanoket) village. It is remembered for its role in King Philip's War.[1]

The first battle of King Philip's War took place near here in 1675. By the second half of the seventeenth century the English settlers need for land had reduced the land of the Pokanoket to the Mt. Hope Lands. After his father Massasoit died, and then his older brother died, Metacom, now King Philip, began making alliances with other tribes and war soon began. King Philip made nearby Mount Hope his base of operations. "King Philip's Chair," a rocky ledge on the mountain, was a lookout site for enemy ships on Mount Hope Bay. Philip was eventually defeated. The site where Captain Benjamin Church's men killed King Philip in 1676 is located in nearby Misery Swamp.

After the conclusion of King Philip's War, the town surrounding Mt. Hope was settled in 1680 as part of the Plymouth Colony. In 1680 all 7000 acres of the Mt. Hope Lands were bought by four Boston businessmen. It became the Town of Bristol, a part of Plymouth Colony. One of the businessmen, Nathaniel Byfield, claimed the 550 acres of Mt. Hope for his own farm. He sold the farm in 1702 to his son-in-law and, in 1744, Byfield's granddaughter, Elizabeth Royall, inherited it. Elizabeth and her husband Isaac built a 2.5 story gambrel roof home. This historic building is still part of the farm, today. Because they were Loyalists, Elizabeth and Isaac fled Bristol during the Revolutionary War and their home and farm were confiscated by the State of Rhode Island.

After the war William Bradford, great-great-grandson of Pilgrim Governor William Bradford, bought Mt. Hope Farm as it was now called. Bradford had been Lt. Governor of Rhode Island, a Senator from Rhode Island and had worked for many years as a public servant. The 1745 house on Mt. Hope Farm is still called The Governor Bradford House. The 127 acre parcel known as Mount Hope Farm is run by the Mount Hope Trust, a non profit, which offers 12 inn rooms to the public. The buildings and grounds are rented for events and a number of community and children's programs are offered. See www.mounthopefarm.org.

Metacom, a main road in Bristol was named after him, derived from his Wampanoag name Metacomet.

It can be seen as part of the Haffenreffer Museum grounds. Church eventually became an owner of Mount Hope.

Mt. Hope remained a part of Massachusetts until the Crown transferred Bristol to the Rhode Island Colony in 1747.

All content from Kiddle encyclopedia articles (including the article images and facts) can be freely used under Attribution-ShareAlike license, unless stated otherwise. Cite this article:
Mount Hope (Rhode Island) Facts for Kids. Kiddle Encyclopedia.