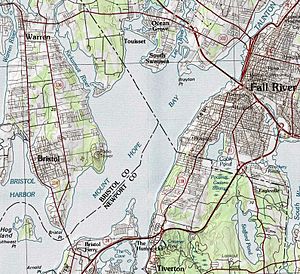 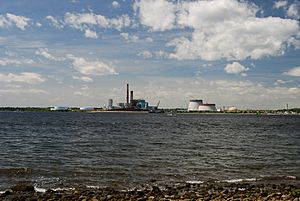 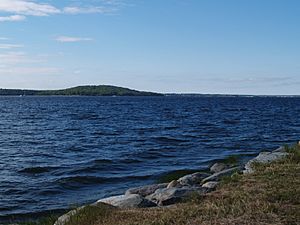 Mount Hope Bay is a tidal estuary located at the mouth of the Taunton River on the Massachusetts and Rhode Island border. It is an arm of Narragansett Bay. The bay is named after Mount Hope, a small hill located on its western shore in what is now Bristol, Rhode Island. It flows into the East Passage of Narragansett Bay and also the Sakonnet River. Mount Hope Bay has played an important role to the history of the area, from pre-colonial times to the present. While many years of sewage and industrial pollution have severely degraded the quality of the shallow waters of the bay, there are currently major efforts underway to clean up and restore it.

Mount Hope Bay is part of the Narragansett Basin, formed as a rift in the Avalon terrane. It is underlaid by sedimentary rocks estimated to be several miles thick. The bay covers an area of about 13 square miles (36 square km), with an average depth of 18.7 feet, although portions of the southern end of the bay are as deep as 74 feet near the Mount Hope Bridge.

Mount Hope Bay contains a 35 foot-deep shipping channel maintained by the Army Corps of Engineers as part of their Fall River Harbor project. A privately maintained, 34 feet-deep channel extends from the main ACOE channel to the Brayton Point Power Station.

Mount Hope Bay was once part of the Wampanoag Nation, and the site of early events of King Philip's War in 1675.

For nearly 200 years, the area of the bay was part of a boundary dispute between the states of Rhode Island and Massachusetts, which was finally settled by the United States Supreme Court in 1862.

Mount Hope Bay has played an important part in the industrial history of the city of Fall River, which is located on its eastern shore. The bay provides access to the city for ocean-going vessels, including for many years the passenger ships of the Fall River Line.

In the 1960s, the 1,500 megawatt Brayton Point Power Station was built by the New England Power Company in Somerset, Massachusetts at the north end of the bay. It has the largest capacity of any power plant in New England. For many years, the plant has relied on the waters of the bay as part of its cooling process. This has led to severe thermal pollution, resulting in periodic fish kills. After years of lawsuits and various environmental government action, current owner Dominion Resources spent approximately $500 million building two 500-foot tall cooling towers and upgrading the cooling system to prevent pollution of the bay. The Brayton Point Cooling Towers were demolished in April of 2019.

In 2009, the City of Fall River completed the first phase of a $185 million Combined Sewer Overflow (CSO) abatement project, designed to drastically reduce the amount of sewage overflows that occur during periods of heavy rains. The project is expected to be completed by 2018.[needs update]

All content from Kiddle encyclopedia articles (including the article images and facts) can be freely used under Attribution-ShareAlike license, unless stated otherwise. Cite this article:
Mount Hope Bay Facts for Kids. Kiddle Encyclopedia.