Warren is a town in Bristol County, Rhode Island, United States. The population was 10,611 at the 2010 census.

Warren was the site of the Indian village of Sowams on the peninsula called Pokanoket (the near parts now called Mount Hope Neck), and was first explored by Europeans Edward Winslow and Stephen Hopkins in 1621. By the next year, Plymouth Colony had established a trading post at Sowams. In 1623, Winslow and John Hampden saved the life of Wampanoag Sachem Massasoit with medicine, gaining an important native ally. In 1636, Roger Williams was banished from Salem and fled to Sowams, where he was sheltered by Massasoit until he settled at Providence.

Permanent English settlement began east of the Indian village. In 1653, Massasoit and his oldest son sold to certain Plymouth Colony settlers what is now Warren and parts of Barrington, Rhode Island, Swansea, Massachusetts, and Rehoboth, Massachusetts. After the death of Massasoit, relations became strained between the Indians and the settlers, leading to King Philip's War in 1675. The English settlement at Sowams was destroyed during the war but was rebuilt. In 1668, the township was officially incorporated with the name Sowams; in 1691, the Plymouth Colony merged with the Massachusetts Bay Colony.

Warren was ceded to Rhode Island from Massachusetts in 1747. The town was named "Warren" after British naval hero Admiral Sir Peter Warren after a victory at Louisburg in 1745. At the time of cession in 1747, Barrington was unified with Warren, until it was separated again in 1770.

In the mid-18th century, the town was well known as a whaling port, and shipbuilding became an important industry. The Revolutionary War seriously affected Warren's commercial prosperity, and the town suffered British raids in 1778 along with the rest of the region.

Warren was the original home of Brown University, founded in 1764 as the College in the English Colony of Rhode Island and Providence Plantations. The school registered its first students in 1765. Brown was the Baptist answer to Congregationalist Yale and Harvard, Presbyterian Princeton, and Episcopalian Penn and Columbia. At the time, it was the only one of these schools that welcomed students of all religious persuasions (following the example of Roger Williams, who founded Rhode Island in 1636 on the same principle). 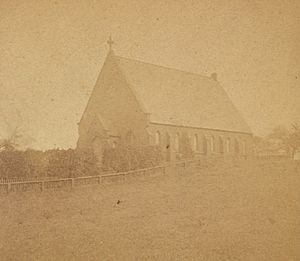 Commerce revived within the decade after the Revolution and, until the middle of the 19th century, Warren was famous for the fine vessels launched from its yards. These vessels were largely commanded by Warren men and operated by Warren crews, and they engaged in whaling, merchant service, and the West India trade. Three notable ships were built in Warren by Chase & Davis: the 1853 clipper Lookout, the 1853 clipper bark Gem of the Sea, and the 1854 clipper bark Mary Ogden.

With the decline of the whaling industry and related seafaring commerce toward the middle of the 19th century, business attention turned to textile manufacturing. Warren's first cotton mill was erected by the Warren Manufacturing Company in 1847. Further mills and factories developed during and after the Civil War, attracting an immigrant work force.

There were 4,708 households out of which 27.4% had children under the age of 18 living with them, 47.3% were married couples living together, 12.6% had a female householder with no husband present, and 36.4% were non-families. 30.8% of all households were made up of individuals and 11.7% had someone living alone who was 65 years of age or older. The average household size was 2.36 and the average family size was 2.96.

All content from Kiddle encyclopedia articles (including the article images and facts) can be freely used under Attribution-ShareAlike license, unless stated otherwise. Cite this article:
Warren, Rhode Island Facts for Kids. Kiddle Encyclopedia.