According to 17th century land evidence, the area now known as Little Compton was originally inhabited by the Sakonnet (variations include Sogkonate, Seconit, Seaconnet, etc.) tribe, who were led by Awashonks. Awashonks' people lived in Wilbour Woods in the wintertime and at Sakonnet Point in the summertime. Her step-son Mamannuah led a separate Sakonnet tribe in the Adamsville area. The two leaders had frequent disputes over land and vied with each other to be recognized by the English as the sole Sakonnet leader.

Sakonnet has been interpreted in a variety of ways: "the black goose comes" or "where the water pours fourth."

The first European settlers in Little Compton were Englishmen from Duxbury, Massachusetts in the Plymouth Colony who sought to expand their land holdings. After first attempting negotiations with Awashonks, they petitioned the Plymouth Colony, which granted them their charter. In a series of lotteries beginning in 1674 and ending in the early 1680s, they divided the land in Little Compton into lots of standard sizes and began settling there. Among these 32 original proprietors was Colonel Benjamin Church. Church was well known for his role in the late 17th-century conflicts with surrounding Native American tribes, notably the Narragansetts and Wampanoags. In 1675, Church built his homestead in Little Compton, just prior to King Philip's War. Today, a plaque on the side of West Main Road gives the location of his original homestead. The plaque is located near house number 600 on the eastern side of West Main Road.

In 1682, Sakonnet was incorporated by the Plymouth Colony and renamed Little Compton. This is possibly a reference to Little Compton in Warwickshire, England. However, there is no direct evidence to substantiate this relationship. By 1747, Little Compton secured its own royal decree and was annexed to Newport County as a part of Rhode Island along with Tiverton and Bristol. Because Little Compton was once part of the Plymouth colony, all probate and land records prior to 1746 can be found in Taunton and New Bedford. 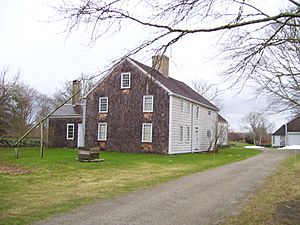 Sites of historic interest in Little Compton include the Wilbor House, built in 1692 by Samuel Wilbore, now the home of the Little Compton Historical Society. The entire town commons is also on the National Register of Historic Places.

There are about 57 historic cemeteries in the town. Colonel Benjamin Church and his family are buried in the Little Compton Commons cemetery, as is Elizabeth Pabodie, the eldest daughter of John Alden and Priscilla Mullins of Mayflower fame. The stones in the cemetery reflect a style of carving similar to that found both in Newport and in Boston during the same time period.

Little Compton is the location for one of three town commons in Rhode Island. The others are in Warren and Bristol. This is most likely a result of the town having been originally laid out by settlers from the Plymouth and Massachusetts Colonies. Land for the common was designated in August 1677 and has been used ever since as both a religious and civic center for social activities in the town.

While there are only a few 17th-century structures still standing (these include the Wilbor house and Peabody house), there are many which date from the 18th and 19th century. The Quaker meeting house on West Main Road, Number 8 Schoolhouse (now used as part of the Town Hall), Town Hall, Wilbur's Store, and the United Congregational Church all pre-date 1900 and are centered around the town commons. Additional historic homes are scattered throughout the town and include the Asa Gray house, the Slicer house, Oldacre, the Brownell house on West Main Road, the Brownell house on Meetinghouse Lane, William Whalley Homestead farmstead on Burchard Ave. (on the National Register of Historic Places), and the Brownell Library on the commons.

Another distinctive feature of the town is the "Spite Tower" found in the village of Adamsville. Local lore claims that the tower was constructed to obscure the line of sight of a town local. While most stories involve members of the local Manchester family, there is no consensus as to the true history of the structure. According to the present day owner of the building, the "Spite Tower" was built above an artesian well. There was a pump that brought the water to a holding tank on the third floor that sent water, via gravity feed, to main house's water tank to provide running water. The building was constructed circa 1905. The chauffeur's residence was on the second floor of the tower.

During World War II Fort Church, named for Colonel Benjamin Church, was built with four batteries near Sakonnet Point. The largest was Battery Gray with two 16-inch guns, an area that would later become the Sakonnet Golf Club.

There were 1,475 households out of which 27.7% had children under the age of 18 living with them, 60.7% were married couples living together, 6.8% had a female householder with no husband present, and 29.4% were non-families. 24.5% of all households were made up of individuals and 11.7% had someone living alone who was 65 years of age or older. The average household size was 2.44 and the average family size was 2.92.

Attractions and sites on National Register of Historic Places 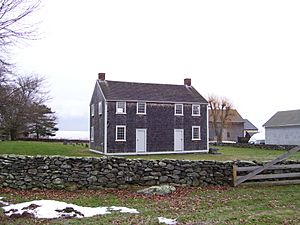 All content from Kiddle encyclopedia articles (including the article images and facts) can be freely used under Attribution-ShareAlike license, unless stated otherwise. Cite this article:
Little Compton, Rhode Island Facts for Kids. Kiddle Encyclopedia.