Dartmouth, Massachusetts is a coastal New England town and was the first area of Southeastern Massachusetts settled. Dartmouth itself is part of the Farm Coast New England comprising a chain of historic coastal villages, vineyards and farms. It celebrated its 350th birthday June 8, 2014. It is also part of the Massachusetts South Coast. The local daily newspaper is The Standard-Times.

The northern part of Dartmouth has the town's large commercial districts. Although it does not abut Buzzard's Bay, there are several waterways including Lake Noquochoke, Cornell Pond, Shingle Island River and Paskamansett River. There are several working farms in town and vineyards. All vineyards in the town are part of the Coastal Wine Tour. The town also has a thriving agricultural heritage and many of the working farms are protected.

The southern part of Dartmouth borders Buzzards Bay where a lively fishing and boating community thrives; off its coast, Martha's Vineyard and Cuttyhunk can be seen. The New Bedford Yacht Club in Padanaram hosts a bi-annual Regatta. With unique historic villages and selection of coastal real estate, it has for many generations been a summering community. Notable affluent sections within South Dartmouth are Nonquitt, Round Hill, Barney's Joy, and Mishaum Point. Still it has its fair share of year round residents lending to thriving seasonal activities all year.

Dartmouth is the third-largest town (by land area) in Massachusetts, after Plymouth and Middleborough. The distance from Dartmouth's northern most border with Freetown to Buzzards Bay in the south is approximately 16 miles (26 km). The villages of Hixville, Bliss Corner, Padanaram, Smith Mills, and Russells Mills are located within the town. Dartmouth shares borders with Westport to the west, Freetown and Fall River to the north, Buzzards Bay to the south, and New Bedford to the east with boat shuttles traveling multiple times daily to Martha's Vineyard and Cuttyhunk.

Dartmouth was first settled in 1650 and was officially incorporated in 1664. Dartmouth's history was that of an agricultural and seafaring community, but during the late 19th century its coastline became a resort area for the wealthy members of New England society.

It was named for the town of Dartmouth, Devon, England, from where the Puritans originally intended to depart for America. The land was purchased with trading goods from the Wampanoag chiefs Massasoit and Wamsutta by elders of the Plymouth Colony; reportedly thirty yards of cloth, eight moose skins, fifteen axes, fifteen hoes, fifteen pairs of shoes, one iron pot, and ten shillings' worth of assorted goods . It was sold to the Religious Society of Friends or Quakers, who wished to live outside the stringent religious laws of the Puritans in Plymouth.

There are still Quaker meeting houses in town, including the Smith Neck Meeting House, the Allens Neck Meeting House, and the Apponegansett Meeting House, which is on the National Register of Historic Places. The town's borders were originally named in the charter (and set by King Philip) as the lands of "Acushnea, Ponagansett, and Coaksett." This includes the land of the towns of Westport, Fairhaven, and Acushnet, and the city of New Bedford. In 1789, the towns of Westport and New Bedford, which included Fairhaven and Acushnet, separated and were incorporated as towns themselves.

The Lloyd Center for Environmental Studies, located in South Dartmouth, is a non-profit organization that provides educational programs on aquatic environments in southeastern New England. It is across the mouth of the Slocums River from Demarest Lloyd State Park, a popular state beach known for its shallow waters.

Round Hill was the site of early-to-mid 20th century research into the uses of radio and microwaves for aviation and communication by MIT researchers. It is also the site of the Green Mansion, the estate of "Colonel" Edward Howland Robinson Green, a colorful character in his own right, who was son of the even more colorful and wildly eccentric Hetty Green, said to be the richest woman in the world in her time, who is listed in the Guinness Book of Records as the "world's greatest miser".

In 1936, the Colonel died, and the estate fell into disrepair as litigation between his wife and his sister continued for eight years over his vast fortune. Finally, Mrs. Hetty Sylvia Wilks, the Colonel's sister, was ruled the sole beneficiary. In 1948, she bequeathed the entire estate to MIT, which used it for microwave and laser experiments. The giant antenna, which was a landmark to sailors on Buzzards Bay, was erected on top of a 50,000-gallon water tank. (After all efforts were made to preserve the structure, it was demolished on November 19, 2007.)

Another antenna was erected next to the mansion and used in the development of the Ballistic Missile Early Warning System. MIT continued to use Round Hill through 1964. It was then sold to the Society of Jesus of New England and was used as a retreat house. The upper floors were divided into 64 individual rooms. The main floor was fitted with a chapel, a library and meeting rooms. In 1970 the Jesuits sold the land and buildings to Gratia R. Montgomery. In 1981, Mrs. Montgomery sold most of the land to a group of developers who have worked to preserve the history, grandeur and natural environment. The property is now a gated, mostly summer residential community on the water featuring a nine-hole golf course.

The former MIT antenna atop Round Hill

The town is accessible by Interstate 195 and U.S. Route 6, which run parallel to each other through the northern-main business part town from New Bedford to Westport on an east-west axis within a mile or two apart from one another.

Massachusetts Route 140 and Massachusetts Route 24 are located just inside the boundaries in New Bedford and Fall River respectively providing access to Boston and points north of the area and is accessible by Interstate 195 and US Route 6. Massachusetts Route 177 also begins on the edge of town (in Dartmouth) on the border with Westport, accessible by US Route 6 near Lake Noquochoke, the Westport River's source. Route 177 runs west into Rhode Island linking Tiverton and Little Compton, and Aquidneck Island (The Newport area/Newport County) with the Fall River-New Bedford area.

The town is bordered by Westport to the west, New Bedford to the east, Fall River to the north, and Buzzards Bay/the Atlantic Ocean to the south.

The highest point in the town is near its northwest corner, where the elevation rises to over 256 feet (78 m) above sea level north of Old Fall River Road. 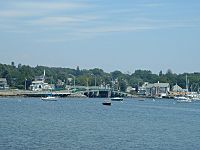 The village of Padanaram, with its bridge in the foreground

Dartmouth established public library services in 1895. Today there are two libraries, the Southworth (Main) Library in South Dartmouth, and the North Dartmouth Library. In fiscal year 2008, the town of Dartmouth spent 1.5% ($865,864) of its budget on its public libraries—some $25 per person.

All content from Kiddle encyclopedia articles (including the article images and facts) can be freely used under Attribution-ShareAlike license, unless stated otherwise. Cite this article:
Dartmouth, Massachusetts Facts for Kids. Kiddle Encyclopedia.