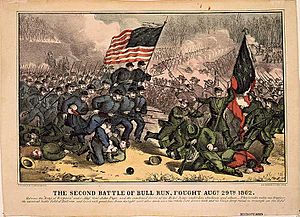 Painting of the Second Battle of Bull Run

The Second Battle of Bull Run (also called the Battle of Second Manassas ) was a battle during the American Civil War. It was fought from August 28 to August 30, 1862. It ended in a Confederate victory.

Union president Abraham Lincoln formed the Army of Virginia near Washington, D.C. in July 1862. He put Major General John Pope in command of the army. Lincoln wanted Pope to attack the Confederate capital of Richmond, Virginia.

Confederate General Robert E. Lee commanded the Army of Northern Virginia. He was trying to protect Richmond from another Union army on the Peninsula. The Union Army of the Potomac had just tried to capture Richmond a few weeks before but failed. Lee would be outnumbered if the two Union armies united. He moved his army north to fight Pope.

Lee planned to send Thomas J. "Stonewall" Jackson's corps to the rear of Pope's army. He wanted to surround Pope. Jackson camped near the Bull Run on August 28, where the First Battle of Bull Run was fought in 1861. Jackson attacked part of Pope's army on August 28 but was defeated.

Pope then tried to attack Jackson on August 29 and destroy his corps. All of the Union attacks failed. Lee arrived during the evening with James Longstreet's corps.

Pope tried to attack Jackson again on August 30 but again was defeated. Lee then attacked Pope and routed the Union army.

There were 13,826 Union casualties in the battle. Pope retreated back to Washington. His army was combined with the Army of the Potomac. Pope was sent to Minnesota after the battle.

There were 8,353 Confederate casualties in the battle. Lee decided to invade Maryland after the battle.

All content from Kiddle encyclopedia articles (including the article images and facts) can be freely used under Attribution-ShareAlike license, unless stated otherwise. Cite this article:
Second Battle of Bull Run Facts for Kids. Kiddle Encyclopedia.